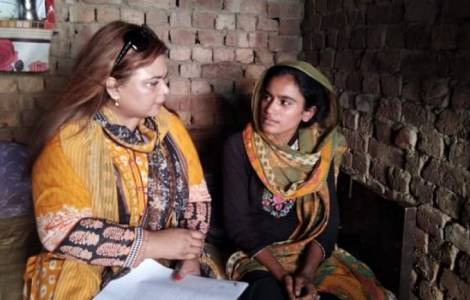 2022-04-30
Civil society to the government: do more to protect religious freedom

2022-04-12
New Prime Minister elected, Christians: "The Constitution is always the point of reference"

Okara (Agenzia Fides) - "We appreciate the police for their quick response and action in arresting the perpetrators of violence against a Christian teenager. It is essential to break the culture of impunity", says to Fides Ashiknaz Khokhar, a Christian engaged in human rights protection following the recent case of a 16-year-old Christian girl from Okara, Punjab, who was abducted and raped by Muslim men.
Okara police arrested Muhammad Arif and two accomplices on January 10. According to the complaint, Arif, 30, harassed the student through text messages and phone calls to convince her to have sex with him. When the girl refused, on January 7, Arif abducted her, gave her a sleeping pill and, with two accomplices, took her to Faisalabad, where he raped her several times, before releasing her in traumatic conditions.
Ashiknaz Khokhar, reports to Fides: "The young girl has suffered serious physical and psychological trauma. For now, she is not even able to speak because of the shock. The family has filed a complaint and the Police have arrested the perpetrators of the violence. "There is an increase in such cases, and so far the government is unable to take firm measures for the protection of girls belonging to religious minorities in Pakistan. These girls suffer from mental and physical trauma and family respect is also greatly affected", notes Khokhar.
This is the third case reported by the Christian community in the first days of January 2022: Zarish, 17, and Angel, 15, also went missing in Kot Radha Kishan.
According to women's rights reports published in mid-2021, in Pakistan's Punjab province alone, a total of 6,754 women were abducted in the first half of 2021. The abduction phenomenon is particularly concerning when it is
addressed to non-Muslim adolescents (girls of Christian or Hindu faith) who are kidnapped, converted and forced into Islamic marriage with impunity. (AG) (Agenzia Fides, 15/1/2022)

EUROPE/ITALY - Migrant and refugee women: they are resources for communities