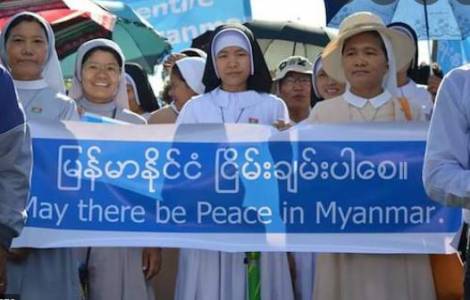 2022-04-11
The Sisters of Reparation: "We walk alongside the people, asking for peace and justice"

2022-02-22
Appointment of the Coadjutor Bishop of Mawlamyine

2022-02-16
Christian university students: "No" to meetings with the military, who commit violence against civilians

Yangon (Agenzia Fides) - The Catholic Church in Myanmar issues a general appeal to remove arms and stop a civil conflict that has taken the form of a "heartbreaking and horrible atrocity", as Cardinal Charles Manung Bo defined it in a statement yesterday, December 27th. The appeal comes in the aftermath of the massacre of at least 35 innocent civilians, all of the Catholic faith, on December 24, in the Burmese Kayah State, in the eastern part of Myanmar, where a majority of the Karenni (or Sino-Tibetan) population lives, and where Christians are about 50% of the population. According to local sources, confirmed by images disseminated on social media, 35 inhabitants of the village of Mo So, in the territory of the city of Hpruso, including women and children, were killed by the military and their bodies set on fire. Refugees in that area were fleeing following an army offensive. "The fact that the bodies of those killed, burned, and mutilated were found on Christmas Day makes this appalling tragedy even more poignant and sickening", said Cardinal Bo, Archbishop of Yangon and president of the Bishops' Conference of Myanmar, recalling that "as the rest of the world celebrated the birth of Christ with joy, the people of Mo So village suffered death, shock, and destruction".
Also Bishops, priests and religious leaders shared the call for a truce and the heartfelt request for an end to the conflict that is tearing Burmese society, where the regular army, Tatmadaw, hunts down militias formed by young people, the so-called People Defense Forces which arose spontaneously across the territory, in opposition to the military junta which took power in a coup on February 1.
The church acknowledges with pain that "our whole beloved Myanmar is now a war zone", and that bombings and destruction take place in many parts of the country. Hence the question: "When will this end? When will decades of civil war in Myanmar cease? When will we be able to enjoy true peace, with justice and true freedom? When will we stop killing one other?" The message launched by the Cardinal continues: "I appeal to all those who have firearms to lay down their weapons. I call on Myanmar’s military, known as the Tatmadaw, to stop bombing and shelling innocent people, to stop destroying homes and churches, schools and clinics, and to begin a dialogue with the democracy movement and the ethnic armed groups. I also call on armed groups and the People's Defense Force (PDF) to acknowledge that guns only perpetuate violence, causing more deaths, more starvation, with devastating consequences for our children’s education, our economy and health".
The Church in Myanmar sadly sees the nation "disfigured by war and violence" and earnestly asks to "seek peace within us and among us" also invoking the help of the international community, in terms of prayers, solidarity, humanitarian assistance, in the arduous search for peace and justice. "We must make peace ourselves, and together chart a new future of freedom with justice, truth and reconciliation", exhorts Cardinal Bo.
The entire Church thanks Pope Francis who, in the Urbi et Orbi message delivered in St. Peter's Square on Christmas Day, said, among other things: "King of all peoples, help political authorities bring peace to societies roiled by tension and conflict. Sustain the people of Myanmar, where intolerance and violence not infrequently target the Christian community and its places of worship, clouding the peaceful countenance of that people". The hope for the Burmese people, local Catholics observe, is precisely "the Child who was born for us" (Is 9: 6), the Incarnate Word, Prince of Peace. (PA-JZ) (Agenzia Fides, 28/12/2021)