ASIA/PHILIPPINES - Christmas of solidarity with the victims of typhoon Odette 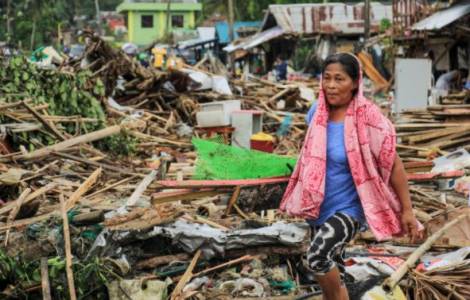 2022-12-05
The "Silsilah" movement: Advent, a season of reconciliation and peace between Christians and Muslims

Manila (Agenzia Fides) - The Catholic Church in the Philippines is mobilizing to help millions of people affected by the recent typhoon "Rai", locally called "Odette", and is preparing a Christmas of profound solidarity. "In this time of tragedies such as the disasters caused by typhoon Odette in Visayas and Mindanao, we need to keep the spirit of love alive in our conscience, the spirit of solidarity with those who suffer", wrote in a message Mgr. Pablo David, President of the Philippine Bishops' Conference (CBCP). The Catholic Church in the country has declared December 25, Christmas Day, and December 26 as “National Days of Prayer” for families affected by typhoon "Odette", as communicated by the Bishops' Conference to all dioceses. Bishop David, at the head of the diocese of Kalookan, said that the "Alay Kapwa Solidarity Fund" will be used for the emergency response of Catholic communities. "We encourage everyone to remit all collections to Caritas Philippines that will then plan and implement our overall response", he added. "May this season of giving offer us more opportunities to do consistent acts of Alay Kapwa (offering of oneself)", he said.
The National Secretariat for Social Action (NASSA), which is the Caritas of the Philippines, is currently mobilizing aid for the most devastated dioceses, Bishop David said, hoping that: "We respond with generosity".
Several dioceses in the Visayas Islands were severely damaged by Typhoon Odette. Among these is the diocese of Tagbilaran. In a statement sent to Fides, Bishop Alberto Sy Uy of the diocese of Tagbilaran said: "Our province of Bohol is heavily devastated by typhoon Odette. Based on the first reports, the roofs of houses and infrastructures have been severely damaged, our churches and convents; plants and crops have been uprooted; electrical connections have been interrupted, as well as the water supply. The number of possible victims is yet to be determined".
A humanitarian alarm has been raised: many of the people affected by this disaster are in desperate conditions and are in need of food, water, clothing, temporary shelter and medicine. They are confined in their respective towns and villages as most of the road networks are cut off. Furthermore, the lines of communication are very difficult right now and people are struggling to reach the affected communities.
Bishop Alberto Sy Uy adds: "Given our serious situation, we humbly turn to you for donations of money, including relief items of various kinds. With an increasing number of casualties, deaths, injuries and displaced people, we need urgent help. We ask you to continue to pray for us".
The Archbishop of Cebu, Msgr. Jose S. Palma, asked everyone to show concrete solidarity towards the people severely affected by typhoon Odette. In some parishes in southern Cebu, there are still electric poles and tree debris on the roads. People stand in long lines for supplies of water and gasoline. There is a lack of electricity and communication in southern Cebu. Most families are affected by the typhoon: people need food, clean water and hygiene kits.
Fr Antonio Labiao, executive Secretary of Caritas in the Philippines reports to Fides that several dioceses in the regions of Visayas and Mindanao (in the southern Philippines) are severely affected by the typhoon and that "they urgently need shelter, food, water and medicine". According to a first, rapid assessment, as many as 10 dioceses are devastated by the typhoon. Among these, the archdiocese of Cebu and the dioceses of Tagbilaran, Maasin and Surigao are "seriously damaged".
"We celebrate the birth of Christ through our charity, mercy, compassion and generosity", he said, addressing the appeal of solidarity to all the faithful, to remember "the families and in particular the children affected by typhoon Odette". Yesterday, December 19, several dioceses held a special collection during Sunday masses to increase the response of the Church. The National Disaster Risk Reduction and Management Council (NDRMMC) said that over 1.8 million people have been affected by Odette. To December 20, Philippine National Police said at least 208 people were killed by Typhoon Odette. More than 239 people were injured, while 52 were missing. According to the Philippine Red Cross, the aftermath of the typhoon is "complete destruction" in coastal areas, with "houses, hospitals, school and community buildings torn to pieces". Odette escalated into a "super typhoon" before landing on Siargao Island in Surigao del Norte on December 16, forcing mass evacuation to lowland areas. With maximum sustained winds of up to 195 km, the 15th typhoon that this year entered the Philippine territory has caused the displacement of thousands of families and also the interruption of power and communication lines. Observers compare Odetto with the super typhoon Haiyan in 2013 and left more than 7,300 people dead or missing. The Philippines, ranked among the globe’s most vulnerable nations to the impacts of climate change, is hit by an average of 20 storms and typhoons every year. (SD-PA) (Agenzia Fides, 20/12/2021)

ASIA/IRAQ - Towards the "Nineveh Fast". Patriarch Sako: help us to rejoice in the salvation of others and to free ourselves from any rigorism

AFRICA/NIGERIA - Bishop of Ondo: "Climate change has nothing to do with the massacre in the church of Owo"