AFRICA/CAMEROON - The Archbishop of Bamenda: attacks intensify, with great suffering of civilians 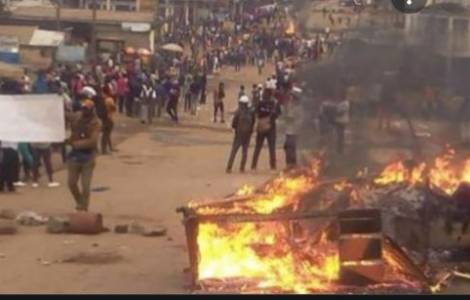 2022-04-02
"Living the Gospel and accompanying young people": inauguration of a new community of the Missionaries of Mary

2021-12-20
The Archbishop of Bamenda: attacks intensify, with great suffering of civilians

2021-11-27
Appointment of the Bishop of Bafoussam, Mgr Paul Lontsié-Keuné

Bamenda (Agenzia Fides) - "The situation in the English-speaking regions is always very tense. According to observers, the 'Amba Boys' (the independence fighters, ed) are intensifying their attacks on the military. This leads to a violent reaction from the army, which however also affects the civilian population. Recently, for example, armed groups planted a bomb near an army center that destroyed the building and killed some of the military and soldiers. In response, they set fire to the houses around the area, resulting in the death among the military and at least two civilians, as well as several completely destroyed homes". This is what the Archbishop of Bamenda, Mgr. Andrew Nkea Fuanya reports to Agenzia Fides. The English-speaking areas continue to represent a hotbed of great tension in Cameroon while the dialogue process is struggling to proceed. The Archbishop continues: "There has been no progress in recent times. Now is a period full of activity, at every level, and we hope that after the Christmas holidays we can resume the process of meeting and dialogue. As for the general situation, after pointing out that the attacks have increased in number and intensity, it must be said that, from a social point of view, life continues: people have learned to live with this absurd state of affairs. Shops, offices, transport continue their business. Even schools are open, although not all, only in large centers, let's say that 60% of institutions are open. In this period, the cities are full of Christmas decorations, churches are always full. People are tired, they want to go back to a normal life and with these demonstrations they take the opportunity to show it to everyone. As a Church, also through the intervention of Caritas and the "Justice and Peace" Commission, we are taking action to support the new internally displaced people created by the latest attacks and we really hope that Christmas can enlighten hearts and that the new year brings good news".
To the situation of high tension that has been recorded for years in the western English-speaking regions, there are recently added those that have emerged in the north of the country, where shepherds and fishermen have clashed violently over issues related to the use of water. In the past few weeks alone, there have been 22 deaths and thousands displaced
"The bishop of Yagoua - concludes Mgr. Andrew Nkea Fuanya - told us that the situation is really difficult. These internal tribal conflicts are truly worrying, especially in that area of the country where we should all be united in order not to offer room for maneuver for the advance of Boko Haram, who is very active in that area". (LA) (Agenzia Fides, 20/12/2021)

ASIA/INDIA - Appeal from the Catholic laity: Stop hatred and violence against Christians

AFRICA/SENEGAL - Casamance: Sant'Egidio calls for the end of military operations and a willingness to negotiate