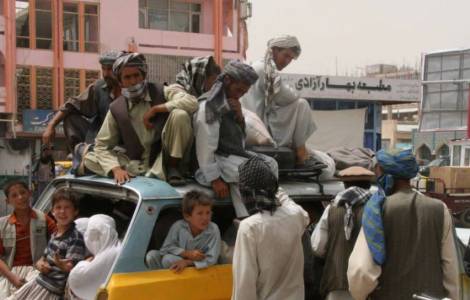 2022-05-03
Looking at realities with the eyes of Jesus: the Camillian missionaries open the LIX General Chapter

2022-04-25
A march to stop the war and its escalation: take the word out of arms and give it back to politics

2022-04-12
"Before God there are no second-class children": Father Maccalli remembers the victims of jihadist terrorism

Trento (Agenzia Fides) – Analyze the situation in Afghanistan, imagine future scenarios and, above all, foresee the involvement and commitment of Europe in a constantly evolving framework: with these objectives, which also concern the mission of the Catholic Church in the country, on Tuesday, December 14, in Trento, Northern Italy, the conference "Afghanistan, the future denied", an initiative that aims to clarify the possible dynamics between donor countries and Afghanistan, touching on issues such as humanitarian corridors, support for the population and commitment to Afghan civil society.
Organized by the associations "46 ° Parallelo" and "Afgana", with the support of local authorities, the public meeting will try to take stock of the Hindukish country four months after the end of a conflict that lasted twenty years, marked by the return of the Taliban to power and that resulted in a dramatic toll of at least 250 thousand victims, mostly civilians.
In the presence of the Vice Minister of the Italian Ministry of Foreign Affairs, Marina Sereni, and the main actors of Italian civil society in Afghanistan and Italy, the debate will touch on various fields such as: the reception of migrants, culture and the academic world, emergency and development cooperation, Afghan civil society. The meeting was prepared with some thematic webinars: due to the reality of the humanitarian corridors already approved by Italy, the associations involved were Caritas, the Community of Sant'Egidio, the Federation of Evangelical Churches, Tavola Valdese, Arci. In fact, it is the Christian organizations that take care of the humanitarian corridors that must transfer to Italy some 1,200 Afghans who have asked to leave the country. In many cases, these organizations, along with other associations, have in recent months provided initial reception, accommodation and support to many Afghan families who arrived after the evacuation of some 5,000 Afghans last August. The conference aims to clarify how and to what extent the Italian government intends to get involved in Afghanistan in the future and what role it could play within a Europe that has so far shown great solidarity towards immigrants. The topic will also raise questions on how European diplomacy intends to deal with the Emirate in Afghanistan, both in terms of humanitarian aid and respect for rights. The diplomatic aspect and diplomatic options will also be important in shaping the future of the Catholic "missio sui iuris" in Kabul, given that the headquarters of the Catholic chapel was inside the Italian Embassy in the Afghan capital. An envoy from UNESCO will also be present to highlight the issue of freedom of expression in Afghanistan. (MG-PA) (Agenzia Fides, 13/12/2021)

ASIA/PAKISTAN - Civil society to government: it is necessary to protect religious minorities

AFRICA/SOMALIA - Bishop Bertin: hope is the beginning of a process of dialogue and democratization

AMERICA/NICARAGUA - The Bishops recall "the basic and indispensable conditions in order to hold free, fair and transparent elections"

ASIA/VIETNAM - Dialogue, cooperation and positive developments in relations between the Holy See and Vietnam