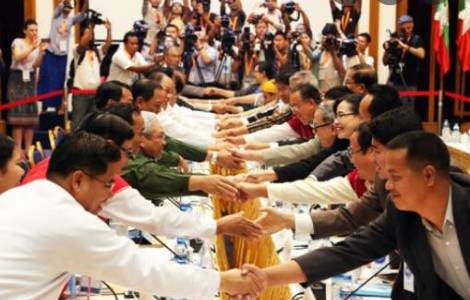 2022-04-11
The Sisters of Reparation: "We walk alongside the people, asking for peace and justice"

2022-02-22
Appointment of the Coadjutor Bishop of Mawlamyine

2022-02-16
Christian university students: "No" to meetings with the military, who commit violence against civilians

Yangon (Agenzia Fides) - "We live in challenging times. The Prophet Isaiah has a memorable sentence which reflects our condition: The people walking in darkness have seen a great light; On those living in the land of the shadow of death, a light has dawned. (Is. 9:2). That land of the shadow of death - every Myanmar heart will say with great sorrow - is our land. Land on which darkness has fallen, a land where violent death has become the norm. This is the valley of tears. The repugnant violence over the last 10 months has offended the sensibilities of the world. Yet we do not accept the evil of despair and hate. With Jesus we wish to proclaim: Let there be peace. To the nation of self-inflicted wounds, we say: Enough is enough, my dear Myanmar". With these words, Cardinal Charles Maung Bo, Archbishop of Yangon and President of the Catholic Bishops' Conference of Myanmar, addresses the faithful of the nation and all Burmese citizens in a heartfelt Advent message, in preparation for Christmas. In the text, sent by the Cardinal to Fides, it is stated that "the injustice and suffering of the innocent is unforgivable. Those expected to guard the life and security of our people have become a frightening cause of distress and dread. Even to them, we say: There is power in love. That is the message of Jesus and Christmas".
The Cardinal remembers with nostalgia that only a year ago the country lived great dreams of progress and prosperity but now "this Garden of Eden has been transformed into the Via Crucis in a valley of tears".
The Message highlights: "Enough is enough, my dear Myanmar. Christmas is the moment of introspection: for those who believe only in violence, those who perpetrate it and those who fall victims. Those who proactively started the violence and believe in the sadistic torture and killing are the primary cause of this valley of tears".
The Cardinal says he is deeply concerned about young Burmese who see "dreams killed by guns" and "strangled by inhuman violence", they experience the temptation and seek revenge. "Hold the truth; hold love. There is always a non-violent path, a peaceful solution. Once again, I appeal not to follow the path of violence. Violence only breeds violence. Change course. Believe in truth; belief in the power of love", he urges them, remembering that "exhibiting love is the prerogative of the brave".
He invites to follow "the truth that liberates you", the appeal invites us to abandon hatred and prejudices and to recover "faith in one another", and the need to be on guard "against wanton violence; the killing of our own countrymen".
"As Christians - observes Cardinal Bo - we seek guidance in the Word of God and the inspiration of the Holy Spirit. Christ is our leader. His birth, his life and his message of hope need to guide us. The Advent tells us that Christ appeared in a similar context of chaos and hatred. He was a victim of the arrogance of the Roman Empire. Death and massacres were the norms when he was a child. Genocide of the children happened when Herod chose to kill all the children. Jesus was displaced. He was a refugee. Herod failed; Pilate failed. Yet the Love Incarnate, in that simple manger, born to poor like our people, won over".
"The manger in Bethlehem - he continues - ultimately won over the might of Rome. Let that be our hope. Amidst the darkness and the suffocating despair, over the poor manger angels sang a song of peace when he was born. The message of Christmas is peace". Recalling the various messages and invitations for pacification expressed by Pope Francis, Cardinal Bo notes that "peace starts with the quest for justice. Not an empty peace but peace born out of justice". And, looking at Christmas as "a time of hope", of freedom, free from hatred, as a propitious time for reconciliation, the message ends with a heartfelt appeal for pacification: "Real Christmas is when this country believes in peaceful means. Let the prophecy of Isiah, prominently displayed in the UN building, become our reality from this Advent season: They shall beat their swords into ploughshares and their spears into pruning hooks; Nation shall not lift sword against nation, neither shall they learn war anymore. (Is. 2:4)". (PA) (Agenzia Fides, 10/12/2021)

AMERICA/COLOMBIA - The Bishops for the Day of Reconciliation: "let us continue the commitment to be artisans of forgiveness, reconciliation and peace"

ASIA/CAMBODIA - Reconciliation and justice: towards the conclusion of the Khmer Rouge trial

EUROPE/SPAIN - The "Star Sowers": the announcement of Christmas made by the little ones and the "gratitude" of the missionaries

ASIA/MALAYSIA - The Archbishop of Kuching: living Advent alongside the poor

ASIA/CHINA - Christmas celebrated in the nation respecting health measures; in Mongolia the authorities grant Catholics the extraordinary opening of the church

ASIA/UZBEKISTAN - Missionaries at the service of the "little flock", with great hopes for the new year