ASIA/PHILIPPINES - The Year of St. Joseph ends, the lay commitment inspired by the saint begins 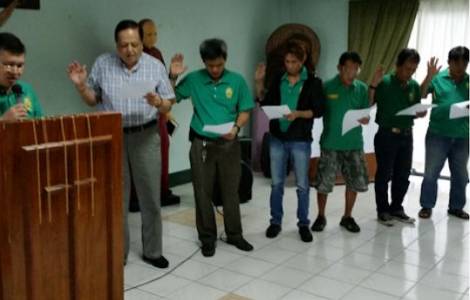 2022-04-27
Celebration of the 500th anniversary: a new impetus for evangelization

2022-04-21
National missionary congress to conclude the Jubilee: sharing the gift of faith

Manila (Agenzia Fides) - The conclusion of the Year of Saint Joseph represents the beginning of a new journey: on December 8 the Filipino Catholic Church formally established the lay association of men devoted to Saint Joseph "Men of Saint Joseph" (MOSJ). These are men, husbands, fathers, called to live in society by witnessing with their lives and announcing the spirit of the saint, in the footsteps of Christ (See Fides, 15/11/2021).
The ceremony for the launch of the new ecclesial reality was followed by the national consecration of Filipino families to St. Joseph. Msgr. Pablo Virgilio David, Bishop of Kalookan and president of the Bishops' Conference of the Philippines (CBCP) yesterday, December 8, presided over a special celebration in the Cathedral of San Roque in Caloocan City, near Manila, in which the new movement was presented. It is the result of a joint effort by the Episcopal Conference, the Council of the Laity in the Philippines and the Oblates of St. Joseph (OSJ). The new Movement "Men of St. Joseph" is the Bishops' response to the call of Pope Francis who, in his apostolic letter "Patris Corde", urges the Church "to reflect on the role of St. Joseph in caring for and loving our Savior, with a Father's heart".
During the Holy Mass, Fr. Jason Andaya, Provincial Superior of the Oblates of St Joseph, formally accepted the responsibility of leading the movement and being its spiritual guide. According to Father Erwin Mendoza, priest in charge of MOSJ, the organization aims to "increase our love for this great saint, encourage us to implore his intercession and to imitate his virtues and his zeal". Among the objectives set, he said, there are those of "sanctifying work; promoting the dignity of work in society; serving the needs of the Church and society through corporal and spiritual works of mercy".
Any Catholic man of at least 18 years of age, eager to learn and commit to imitating the virtues of St. Joseph, can become a member of the organization. MOSJ is one of the legacies of the Episcopal Conference for the Year of St. Joseph, which ended on December 8, on the Solemnity of the Immaculate Conception of the Blessed Virgin Mary. The Year of Saint Joseph began on December 8, 2020, with a decree authorized by Pope Francis on the occasion of the 150th anniversary of the proclamation of the Saint as Patron of the Universal Church. (SD-PA) (Agenzia Fides, 9/12/2021)

ASIA/INDIA - The Missionaries of Charity: "to live like the poor among the poorest, to bear witness with them to God's love"

AMERICA - Saint Toribio de Mogrovejom, the great evangelizer who anticipated the journey of the "Church which goes forth"