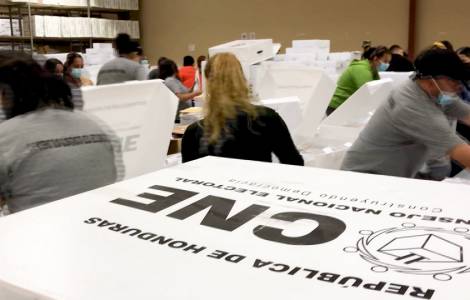 2022-01-25
The Bishops ask for sincere and open dialogue, in order "not to endanger the rule of law"

2021-12-28
The Bishops: "Let us undertake the serious and responsible commitment of the reconstruction our country’s needs"

2021-12-07
The Bishops: "May the elected authorities working for the common good project Honduras towards a prosperous future and integral well-being for all"

Tegucigalpa (Agenzia Fides) - Iris Xiomara Castro, 62, was elected President of Honduras on Sunday November 28. The first woman to hold this position, the Social Democratic leader is the wife of Manuel Zelaya, the former president deposed in 2009 by the coup that led to the last 12 years of the Conservative Nationalist Party's government. Her electoral program was focused fighting corruption and a promise to end what she described as a "narco state". Nasry Asfura, her political rival, acknowledged the defeat and congratulated the winner even before the conclusion of the electoral ballot.
With a message dated December 6, sent to Fides, the Honduran Bishops join in the congratulations of national institutions and international organizations, "wishing the President-elect to exercise public administration that promotes authentic development and growth of our country and of each Honduran family, seeking the good of the poorest and most excluded, in authentic respect for the dignity of the human person, the right to human life, from conception to natural death, as well as respect for the sacred institution of marriage and family". "Our hope - they say - is that this reconstruction of a developing Honduras will continue in peace, with respect for life and the dignity of the person". The Bishops recall having already expressed on several occasions their great concern for the social, economic and political situation of the country (see Fides, 15/10/2021; 27/11/2021), for which they congratulate all the citizens who attended the polls overcoming apathy and discouragement, showing maturity and commitment: the participation "was extraordinary, in peace and transparency". On November 28, in addition to the President of the Republic, also the deputies of the National Congress and of the Central American Parliament, as well as the mayors were elected. The Bishops note that in the last few days fraud has been reported at these other electoral levels, for which they ask the responsible entities "to pay due attention to these claims and to resolve them expeditiously and based on the law. For the good of our country, there can be no doubt about the transparency in the counting of the votes and the respect of the voters' decision". The Church in Honduras has always worked for the development of peoples, based on fundamental human and Christian values, which is why it joins "those aspects that Ms. Xiomara indicated as a priority of her government and to which we also give priority: eradication of poverty, the fight against impunity, job creation, the dignity of the health system and education". Finally, the Bishops reiterate their firm conviction that for the next government the priority "to solicit and strengthen the dialogue, reconciliation and action" that the country needs: "The elected authorities, working for the common good, will be able to project Honduras towards a prosperous future and integral well-being for all, especially for the poorest". (SL) (Agenzia Fides, 7/12/2021)