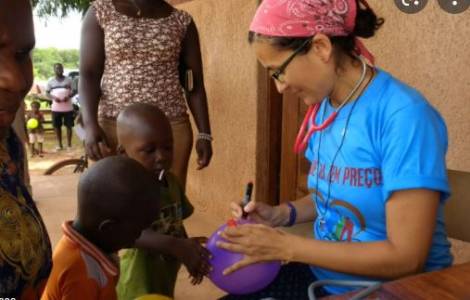 2021-12-07
In a difficult social situation, requests for baptism are growing

2021-08-20
Death of Iman Ustas Aladji Bubacar Djalo: "His commitment to dialogue will not be forgotten"

2021-06-19
After almost twenty years, the Catechetical Formation Center for families-catechists from the rural world reopens

2021-04-09
The Bishop of Bafatà died of Covid: the first Brazilian missionary Bishop of a mission territory outside Brazil

2020-07-18
"Still too many infections" due to Covid-19, the Bishops postpone the opening of churches for worship

Bissau (Agenzia Fides) - "From a social point of view, the situation in Guinea Bissau is rather difficult. Hospitals do not have anything, health personnel have not received their salaries for months and are on strike, while the mission hospitals are overcrowded. Volunteer doctors are coming from all over the world to support a situation that is collapsing. Not to mention the school. Similarly, months go by without teachers receiving wages. Infrastructures, the roads of cities or inland areas, are in terrible condition, especially the one that leads to Senegal and nothing is being done to improve the situation". Father Celso Corbioli, of the Oblate Missionaries of Mary Immaculate, spiritual Director of the major Seminary of Bissau, in the Country since 2003, thus explains to Fides the critical moment that Guinea Bissau is experiencing, also due to a period of political instability that is has been going on since the last elections held in November 2019.
The missionary continues: "The presidential elections in 2019 created discontent and many denounced fraud. The victory went to Umaro El Mokhtar Sissoco Embaló but many observers say he did not really deserve it. The candidate, Domingos Simões Pereira, asked for a recount but the Electoral Commission never accepted. From that moment on, the political situation became increasingly tense and the relationship between the president and Prime Minister Nuno Gomes Nabiam deteriorated. In February 2020, after delays and tensions, Embaló took office and the investiture ceremony in a hotel was organized by the Prime Minister himself. At the time, therefore, there was unity between the two highest offices but, in recent months, the relationship has deteriorated and the situation remains very tense. In any case, there is discontent among the population and the orientation, shown by the president, of wanting to amend the Constitution is not reassuring. Yet Guinea could be far ahead in development, with a good administration. We have many resources and tourism could be an inexhaustible source of wealth for the population. We are not poor, there are many opportunities for trade".
Guina Bissau is a country with an Islamic majority. Coexistence with 20% of the Christian population (75% of whom are Catholic) is peaceful. The presence and participation of Catholics have for some time been recording significant growth. "The life of the Catholic Church continues: in our parish of St. Francis of Assisi in Antula, in Bissau, there are many catechumens, more than 3,000 have applied for baptism, but here with us, the preparation lasts even 7 or 8 years : therefore one must be convinced in order to take this path. The interesting fact is that in recent times, it is not only Christian children who are approaching baptism. Also, since the churches have been reopened, people have participated in large numbers, churches are always full. Overall, the Church is experiencing an interesting season, we are not affected by that western wind of distancing". The situation, according to Father Celso Corbioli, is on the whole encouraging. The missionary notes: "We have been waiting for a year, since Bishop José Câmnate na Bissign resigned for health reasons, for the appointment of the new Bishop of Bissau. At the moment his auxiliary José Lampra Cà has been appointed apostolic Administrator. In addition to this moment of waiting, also another diocese of Guinea Bissau, that of Bafatà is vacant, following the death from Covid of Bishop Pedro Zilli, a much-loved Brazilian priest of PIME, always close to the people. At the moment there is Don Lucio Brentegani, who was appointed diocesan Administrator.
Thanks be to God, here there is no problem of religion and relationships with other faiths. We hope that this continues and that the problems and conflicts that occur in other parts of Africa, some even close to us, will not be experienced". (LA) (Agenzia Fides, 7/12/2021)

ASIA/BAHRAIN - "Civil inauguration" of the Cathedral of Our Lady of Arabia, in the presence of Cardinal Tagle

AFRICA/D.R. CONGO - The work of the White Fathers to stop violence against women, "offering the support of the Gospel"