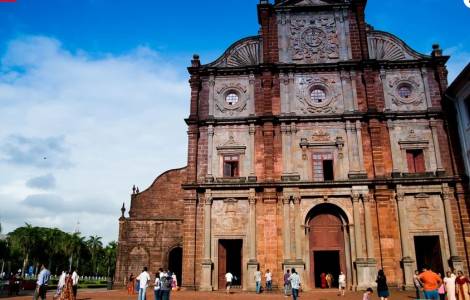 Goa (Agenzia Fides) - The celebration of the feast of St. Francis Xavier in ancient Goa, where his relics are kept, was held yesterday, December 3, after a solemn novena started on November 25.
The feast is normally celebrated in the Basilica of Bom Jesus, one of the oldest churches in Goa, completed in 1605, where the mortal remains of the saint are kept.
This year, out of respect for the protocols linked to the pandemic, all the celebrations took place outdoors. The feast of St. Francis Xavier attracts thousands of people from all over the country, in particular pilgrims from the states of Maharashtra, Karnataka, Tamil Nadu and Kerala.
"Many of them walk the distance from their homes to the Church in prayer. Groups of pilgrims from Karwar, Belgaum, Sawantwadi, Azra and Malvan usually arrive on foot", said Father Patricio Fernandes SJ, rector of the Basilica of Bom Jesus. Among those who participate in the celebration are devotees from Europe, other Asian countries, and even non-Christians. Holy masses, which all took place in the park surrounding the Basilica, began at 4 am, as large numbers of people had camped the night before near the Basilica.
About 15,000-20,000 people attended the main mass of the feast, celebrated by the Bishop of Udupi, Msgr. Gerald Lobo. "In these times of fear, suffering, death, St. Francis' message is that suffering is not caused by God but by what we do and how we live. The Saint urges us to face difficulties with courage and to find answers by trusting in God's love for us. The gifts and talents that God has given us must be used to face the challenges we encounter. As Francis Xavier did, let us respond to God's call to love him in our brothers and sisters, especially the poor, the defenseless and the suffering", said in a message sent to Fides Jesuit Fr. Dominic Savio SJ, principal of St Xavier's College in Calcutta.
The liturgical feast of December 3 marks the day the Saint died during his journey to China. His remains are displayed to the faithful every 10 years. The last ostension was in 2014 and the next is scheduled for 2024. Francis Xavier is, together with Saint Therese of Lisieux, Patron of the missions. The Jesuit, born in Navarre (Spain) in 1506, is best known as a missionary and evangelizer in Asia. He became a priest and went on a mission to India. He went as far as Taiwan and, perhaps, as far as the Philippines. He then travelled to Malaysia and arrived in Japan. He embarked on a journey to China, but fell ill with pneumonia and died in 1522 in Goa. He was canonized a century later, in 1622. (PA) (Agenzia Fides, 4/12/2021)