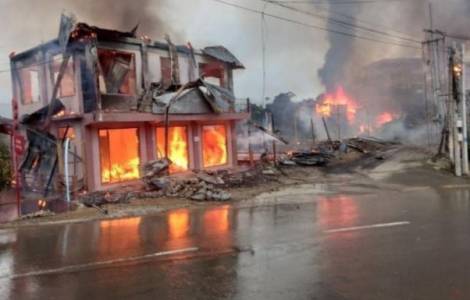 Pekhon (Agenzia Fides) - St. Nicholas Catholic Church in the town of Thantlang of the diocese of Hakha was burned down. As learned by local sources of Fides, on November 28 the Myanmar army burned more than 80 houses in the city of Thantlang, in the Burmese state of Chin, in western Myanmar, accusing the residents of collaboration with the rebels. As residents report, the military violence began on November 25 and lasted for at least 4 days in the city where Catholic and Protestant faithful live. The church of St. Nicholas, now destroyed, was built 28 years ago; although the local Catholic community is small, two priests were born within that community, which has already been hit by military violence in recent months. Due to the intense fighting between the Burmese regular army (Tatmadaw) and the youth militias of the Chinland Defense Force (CDF), all the inhabitants of the city of Thantlang (about 10,000 people) have fled, while the military continue to set empty houses on fire.
"While the army of Myanmar burns the homes of civilians, arrests and kills the local population, in various areas of the country civilians are fleeing into the forests: this is what is happening in the Chin state, both in the Shan state, in the Kayah state" (in the territories of the dioceses of Hakha, Pekhon and Loikaw respectively), a local source of Fides reports. In those three regions there is a stronger and more organized resistance of the youth militias against the army of Myanmar, which carries out retaliation against the local population.
In a scenario in which Christian places of worship are continuously affected, Bishop Peter Hla, at the head of the diocese of Pekhon, in Shan state, sent a heartfelt letter to the head of the local army of Myanmar. In the letter, sent to Fides, the Bishop painfully recalls the bombing of the Cathedral of the Sacred Heart in the city of Pekhon by the military, hit by rockets three times in five months.
"Attacking the cathedral is like attacking the hearts of each of the faithful and all the faithful feel sad due to attacks", writes Bishop Hla. The diocese of Pekhon - notes the text sent to Fides - has always established cordial relations with the representatives of the local army and is willing to maintain a relationship of respect. "But if the Catholic churches and buildings are attacked again, all cordial relations will be cut off and this will cause painful consequences for all", as further tension and hostility will be created in the society already troubled by the civil conflict.
Acts of gratuitous violence against civilians and places of worship increase frustration and youth protest against the army, a local priest notes to Fides, stressing that churches are increasingly becoming the targets of military attacks, while this does not happen for pagodas and Buddhist temples. The faithful Catholics and other confessions are frightened, and fear a targeted reprisal against the Christian communities.
The population in the diocese of Pekhon is about 340 thousand inhabitants (many belonging to ethnic minorities such as Shan, Pa-Oh, Intha, Kayan, Kayah) and there are about 55 thousand Catholics. Christians in Myanmar are about 6% of the population, 90% Buddhist and, according to the last census of 2016, they are mainly concentrated in the Chin, Kayah and Kachin states. Belonging mainly to ethnic minorities - historically fighting for autonomy from the central government - they suffer, for reasons linked to both ethnicity and religion, an ancient hostility from the Burmese army, which is mainly composed of members of the Bamar ethnic group and Buddhist beliefs. (JZ-PA) (Agenzia Fides, 1/12/2021)

AMERICA/EL SALVADOR - The four martyrs beatified: "May their heroic example arouse in everyone the desire to be courageous agents of fraternity and peace"

AMERICA/EL SALVADOR - CLAR on the new martyrs: "The commitment and defense of the poorest were their death sentence"

ASIA/INDIA - Vandalism in a Catholic church in southern India