EUROPE/ITALY - A Missionary Family with a heart turned towards Afghanistan 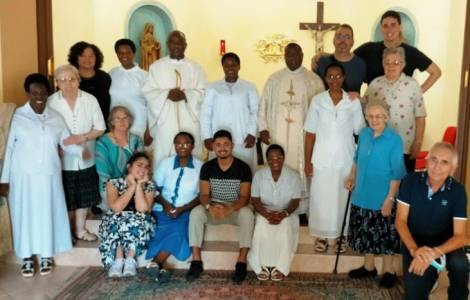 2022-01-05
"Mondo e Missione" looks back on 150 years: the history of the magazine is closely linked to the Pontifical Mission Societies

2021-12-15
Humanitarian corridors from Afghanistan, a way to save lives

2021-12-13
Between cooperation and diplomacy: Christian realities protagonists of the future of Afghanistan

Rovigo (Agenzia Fides) - Afghanistan is alive in the hearts of the faithful and missionaries: even if the experience of the Missio sui iuris in Kabul has currently been interrupted, the attention of the diocesan missionary center of the Italian diocese focuses on missionary challenges of Adria-Rovigo and by the Missionary Family of the Redemption. Don Silvio Baccaro, director of the Center, explains to Fides that, meeting and talking about Afghanistan, war and peace, "is a way to bring citizenship closer to the Afghan families that Rovigo decided to host after the fall of Kabul on 15 August", while Sister Luisa, superior of the female branch of the Family, recalls the Pope's messages on Afghanistan and the fundamental role of women.
This momentum of missionary animation is reflected precisely in the life and work of the Missionary Family of the Redemption, founded in 1946 by Don Achille Corsato, a diocesan priest who died in 1998. The priest, strongly committed to the Pontifical Mission Societies, following the profound missionary in his heart, chooses as patroness Saint Maria Chiara Nanetti, martyred on 9 July 1900 in China and proclaimed a saint on 1 October 2000 by Saint John Paul II.
In the process of its establishment, the Missionary Family of the Redemption will be made up of two branches: consecrated single missionaries; and missionary priests, deacons and celibates consecrated with the vows of poverty, chastity and obedience, with the aim of contemplating, living and joyfully proclaiming the mystery of Christ the Redeemer of the world. There are also lay missionaries, married couples who form the Families for the Mission group and who are committed to living the charism of the Family. Teresa Rizzo was the first sister who, as a consecrated laywoman, chose to dedicate her life to the mission, which is present today in Italy but also in Brazil and Burundi from where almost all the sisters living in the community in Italy currently come. The current superior herself is from Burundi from where she has recently returned after more than a decade of service in her country of origin. The challenge - the missionaries explain to Fides - is "to promote human and Christian education and formation, the culture of respect for diversity, that of solidarity, justice, legality and interreligious dialogue, in the name of Christ Jesus". The mission supports development and solidarity projects through long distance adoptions, school, professional and health training "paying attention to the most urgent needs of those who the Lord makes us meet".
In Burundi, since 1994, every year, the Missionary Family supports and takes care of over a thousand children and young people. Medicines are provided in case of illness, adequate nutrition and schooling in structures built in recent years or in families willing to welcome minors.
The Family also has a monthly, where activities are accounted for, and has also printed several books, including one dedicated to a very particular story: that of little Deddy, an African child suffering from macrocephaly. But the story of this "missionary boy", whom the sisters brought to Italy to be treated properly, is also a message of hope that goes beyond illness and brings Africa closer to Europe. The boy also met Benedict XVI and later Pope Francis. To both of them he said: “I do not see you with my eyes, but I see you with my heart”. (MG) (Agenzia Fides, 29/11/2021)