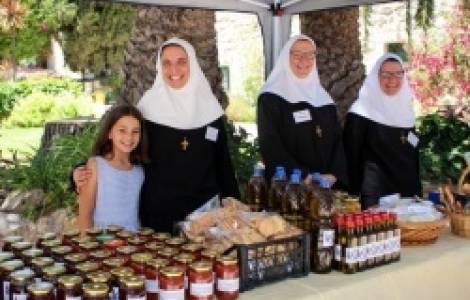 2021-12-01
"Autochthonous and rooted in this land". The Assembly of Christian Associations in Palestine is born

2021-11-24
“Work is love made visible”. Women in Holy Land give life to the "interreligious" Christmas Market

2021-10-28
Jerusalem, Israeli authorities block the cultural festival organized in the House of Abraham. The Heads of the Catholic Churches express deep concern

Jerusalem (Agenzia Fides) - Small pieces of jewelery and crockery, cosmetics and fashion accessories, sweets and local specialties. But also icons, ceramics, organic jams, candles are the many gift ideas that can be found on Friday, November 27 at the "Christmas Bazaar", at Abraham's House (Beit Ibrahim, "Abraham's House"), in East Jerusalem, in Silwan neighborhood, south of the Old Town.
At that structure, managed by the Secours catholique association (the French Caritas), stalls and exhibition spaces will be set up for one day for women's handcrafts, born from the dedication of women belonging to different nationalities and faith communities, mainly residents in Silwan and in the Arab neighborhoods of East Jerusalem. In the Bazaar there will also be a space for articles produced in the monasteries by the nuns of many female religious congregations. During the opening hours of the Christmas Market, also marked by convivial occasions, concerts and small artistic performances, women belonging to different conditions, nationalities and communities of faith, will spend the whole day together, to get to know each other better and to discover their common destiny: to put their know-how at the service of their community or their family to offer them a dignified life.
"All these nuns, all these mothers, sisters and daughters" writes Florence Budry on the website of the Latin Patriarchate of Jerusalem, presenting the initiative "proudly present their work, the result of their imagination and talent, after sometimes long hours of vigilance, seeking perfection while already thinking of the buyer's satisfaction".
The initiative hosted by Abraham's House also acquires importance as it returns to re-propose that residence as a space for meeting and friendship between people belonging to communities of different faiths and nationalities, after the unfortunate event that occurred at the end of October, when Israeli policemen and plainclothes agents raided the House, abruptly interrupting a festival of cultural activities prosecuted as "illegal" by virtue of their alleged direct traceability to the Palestinian National Authority. The episode, which occurred on Tuesday, October 26 (see Fides, 28/10/2021), provoked the reaction of the Assembly of the Heads of the Catholic Churches of the Holy Land, which in a statement expressed "concern" at the "repeated hostile and repressive acts" implemented in the Holy City by the Israeli authorities "towards everything that is considered Palestinian".
Abraham's House offers hospitality to pilgrims and supports initiatives in favor of Palestinian families residing in the area. Like the Saint-Anne Church in the old city, this building enjoys the "protection" of the French authorities.
On October 26th, a three-day cultural festival co-sponsored by the Palestinian National Theater, the National Conservatory of Music and the Mobile Theater opened here. Sponsored by the United Nations and organizations from France and Austria, also included the creation of theatrical and musical workshops aimed at young Palestinians living in the area. According to diplomatic sources cited by international agencies, plainclothes police and other personnel forcibly interrupted the activity and showed the person in charge of the House an order to cancel the activities in progress, signed by Omer Barlev, Israeli Minister for Public Security. The order provided for the cancellation of the Festival as it was "supported and sponsored by the Palestinian Authority without written permission".(GV) (Agenzia Fides, 24/11/2021)

ASIA/AFGHANISTAN - Keep the door of hope open, especially for women

ASIA/SYRIA - Bishop of Aleppo: Western sanctions are a "death sentence" for the Syrian people