AMERICA/PARAGUAY - Year of the Laity: promoting formation, communion and the missionary spirit of the laity 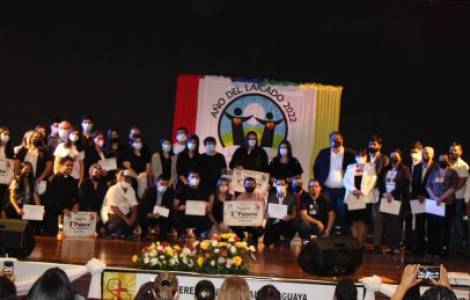 2021-12-09
The Bishop of Caacupé: "we have an obligation to 'organize hope' in order to leave the pandemic and impunity behind"

2021-12-07
Young people gathered in Caacupé: "We are the today of God and of the Country, today we must participate, commit ourselves and act"

2021-11-30
Respect for indigenous peoples, agrarian reform, promotion of the common good: open letter from the Bishops to the authorities

2021-11-23
Year of the Laity: promoting formation, communion and the missionary spirit of the laity

Caacupé (Agenzia Fides) - After the Mass celebrated for the solemnity of Christ King of the Universe on Sunday, November 21, in the Sanctuary of the Basilica of Caacupé, about 300 people, members of diocesan delegations from all over the country, gathered in the municipal theater to participate in the official launch of the Year of the Laity convened by the Bishops (see Fides, 19/11/2021). According to the information sent to Fides by the Episcopal Conference, the event began with the presentation of the pastoral Project of the Paraguayan Bishops' Conference by Monsignor Celestino Ocampo, Bishop of Carapeguá and responsible for the laity, who encouraged people present to accompany the synodal path of missionary transformation: "The whole Church, in unity and communion, feels the importance of living the same process and of working for transformation and evangelization, according to the will of God".
From the interventions that followed, it emerged that the main objectives of this process are to strengthen the feeling of belonging to the Church of each baptized person, to promote formation and to favor the communion of the laity in the dioceses, parishes, movements and ecclesial communities. The lines of action will be, among others, to promote human values, continuous and systematic formation, to encourage the missionary spirit, to generate spaces of discernment and to integrate and promote the pastoral actions of an "outgoing" Church.
The executive secretary of the Pastoral Commission of Bishops, Blanca Palacios, explained the meaning of the official logo of this pastoral year, which comes for the Paraguayan Church after the Year of the Word and the Year of the Eucharist.
"We are invited to go out to all and proclaim Christ, according to the personal experience of a disciple who, inasmuch as he loves and knows the Lord, feels the need to share with another his joy of being sent, of going into the world to announce Jesus Christ who died and rose, to concretize love and service in the person of the most deprived, in a word, to build the kingdom of God", she said.
On this occasion, the hymn of the Year of the Laity was chosen: the five selected songs were performed in front of the assembly of those present. A professional jury chose the song "We are your disciples", by Coronel Oviedo's group "Huellas". The event ended with a prayer led by Monsignor Celestino Ocampo. (SL) (Agenzia Fides, 23/11/2021)

ASIA/CHINA - Making God's love visible in society: this has been the mission of the Group of volunteers of the Nan Tang parish in Beijing for 10 years