AFRICA/SUDAN - The population refuses to return to the military regime 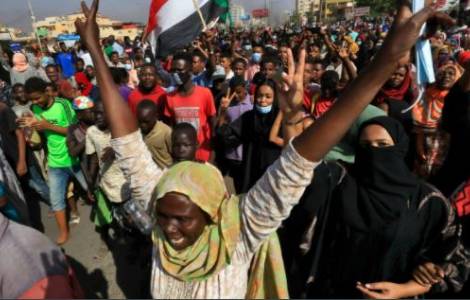 2021-12-02
The commitment of Comboni missionaries: helping refugee minors from South Sudan to return to school

Khartoum (Agenzia Fides) - "The tones are getting more and more exasperated. The military, after the failure of the hypothesis of a national unity government - after the failure of talks with the deposed Prime Minister Abdallah Hamdock and civilians - are still looking for someone willing to form a government with them. Officials now turn their attention to Islamists who hope to return to power, while several interlocutors contacted have declined all invitations, because "no one seems to want to captain a sinking ship". This is reported by a Fides source in Sudan, who requests anonymity for security reasons, almost a month after the coup that on October 25 interrupted the experience of the transitional government, 50% made up of representatives of civil society. The source of Fides in the local Church recounts the tragic event of November 17, marked by an imposing wave of popular demonstrations: "The army's response was extremely harsh: according to the most reliable estimates, there were 15 deaths among the protesters in the 3 different areas of Khartoum where the protests were taking place. It is a heavy number that heralds dark times. For the occasion, in addition to all the bridges and roads, all telephone and Internet lines were interrupted for at least 12 hours".
The Sudanese population continues to unite, expressing its rejection of the return to the military regime and taking to the streets to support Prime Minister Abdalla Hamdok, still under house arrest since the coup. They ask for a return to the experience of the transitional government that, at the end of the so-called "Sudanese spring", in early 2019, led to the formation of an executive made up half of civilians. The repression carried out by police forces, which also killed a dozen people on Saturday, November 13, did not appear to stop the crowd. Journalists are also being affected. On November 14, army forces forcibly evicted the home of El Musalmi El Kabbashi, director of the television channel "Al Jazeera" in Khartoum. To date, according to the same television station, no reasons have been given for the violent intervention. "Al Jazeera - a note reads - strongly condemns the irresponsible action of the army and calls on the authorities to release El Kabbashi as soon as possible and to allow journalists to carry out their duties without obstacles, free to exercise their profession without fear or intimidation". "Before the revolution", concludes the source of Fides, "we lived 30 years in a dictatorship under harsh Islamic law, with a school program that encouraged extremism in society and taught hatred; we really hope not to go back to the past". (LA) (Agenzia Fides, 20/11/2021)

AFRICA/GUINEA BISSAU - A missionary: "There is no clarity on the failed coup: a destabilizing act"

AFRICA/GUINEA BISSAU - The shadow of drug trafficking in the attempt to attack the top management of Bissau?