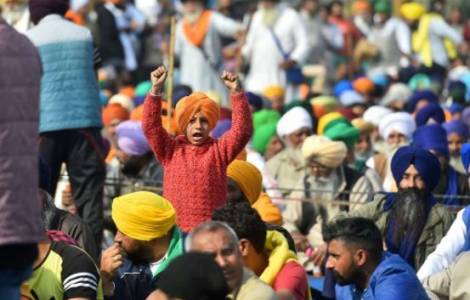 New Delhi (Agenzia Fides) - "We welcome Prime Minister Narendra Modi's belated wisdom in repealing the three agricultural laws that had an unconstitutional profile. It is a victory for the people: the future of India is not in the hands of large multinationals ". This is how Jesuit Father Irudhaya Jothi, social worker in Tripura, in northeastern India, comments to Agenzia Fides after yesterday, November 19, Prime Minister Narendra Modi, in a speech to the nation, announced the abrogation of three controversial agricultural laws that for a year have caused massive protests by farmers across India. The laws will be officially repealed during the winter session of the federal parliament starting on 29 November. "It is the victory of 700 million farmers - adds the Jesuit - who have suffered in the last year. The popular movement will be stimulated to fight to cancel other laws such as the Unlawful Activities Prevention Act (UAPA), which has affected many human rights defenders like his father Stan Swamy, accusing them of terrorism or sedition". The Verbite Fr. John Paul SVD, Director of the Communications Office in the diocese of Jaipur, in Rajasthan, told Fides: "I am happy with the repeal of the three agricultural laws. The federal government should have repealed them a long time ago.
The poor farmers have been protesting for more than one year, endured great heat and heavy rains and faced many problems. Despite all the serious problems, they never gave up". Fr. John Wakhla SVD, parish priest at St. Arnold's Church in Indore, Madhya Pradesh, added: "These three agricultural laws would have made the life of the peasant population hell and turned the peasants into enslaved and subjugated workers. This danger has been averted for the time being". Prime Minister Narendra Modi's announcement was made on the occasion of "Guru Purab", the birthday of Guru Nanak, the founder of the Sikh religion, whose members make up the majority of the protesting farmers. Many of them camped on the outskirts of the capital Delhi until November 26, 2020. Modi said the agriculture laws were designed to help small farmers and he regretted that the government had failed to convince farmers of the benefits of these measures. He said that, as Prime Minister, he intends to give the utmost importance to the development of farmers, as he has already done by strengthening rural market infrastructure and raising minimum prices for agricultural products. The three agricultural laws are being withdrawn in the run-up to the general elections in several Indian states: In March, elections are due in Goa, Manipur, Punjab, Uttar Pradesh and Uttarakhand. In the states of Gujarat and Himachal Pradesh, the mandate of the state parliaments also expires by December. (SD-PA) (Agenzia Fides, 20/11/2021)

ASIA/LEBANON - Young Christians and farmers united in the "Community market of agricultural producers", against the specter of the food crisis

ASIA/INDONESIA - Pastoral care of "agroecology" to build the "common home"