ASIA/PAKISTAN - The cross of Kovardo and symbols of the Christian faith in Northern Pakistan: new studies are being prepared 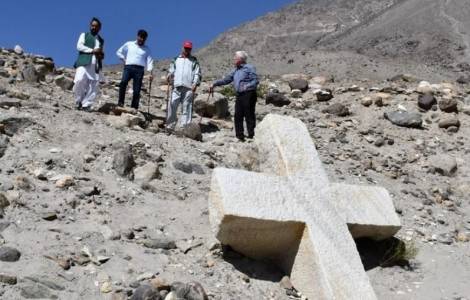 2022-01-10
Christian victims of blasphemy: a Pastor sentenced to death, a layman released on bail

2021-12-23
Christian girl, kidnapped and converted, reunites with her family

2021-12-22
The President of Pakistan: a law will be made against forced conversions

Multan (Agenzia Fides) - "In addition to the cross found in the village of Kovardo, in the mountains of Skardu-Baltistan, in northern Pakistan, many other inscriptions, objects and archaeological sites have been found or potentially located, indicating the cultural richness and religious of the peoples of Pakistan. During our visit to the cross of Kovardo we were surprised to see other symbols of Christian faith in the mountains, especially the symbols of a cross and a lamb. Many other symbols engraved on the mountains and hills. With the help of some friends we were able to discover the place of the tombs of the two missionaries who lived in that area, unfortunately transformed into a connecting walkway between various private homes; the tombstones are missing": this is what Fr. Gulshan Barkat OMI, Professor of Church History at the Catholic National Institute of Theology in Karachi said in a message sent to Fides.
Fr. Gulshan Barkat also stated: "The cross of Kovardo discovered in June 2020 (see Fides 22/6/2020) proves the presence of many layers of culture, history, movements and religious traditions in Skardu. It is also the proof of the developed civilization Skardu which is not only a geographically important center, given by the meeting between HinduKush, Karakoram, the Himalayan ranges and the Indus river". Fr. Barkat continues: "This area was linked to the Silk Road, which connected China with the Persian Empire and beyond, with Syria and Constantinople. From 500 AD the Silk Road was the link between China and Mongolia through what is now Northern Pakistan and Central Asia".
Fr. Barkat informs: "The cross of Kovardo weighs about 4 tons and is made of limestone marble and is 6.7 feet high and 6.4 feet wide. It is said that the cross lay upside down until a group of men turned it over. It is thought that a part of the cross, at one of the two ends, is broken and is still in the ground where it was installed". To ensure the conservation of that archaeological find, "the residents of the area donated a portion of land surrounding the site of the discovery to the Church, placing fences to protect the cross".
Catholic priests Fr. Robert McCulloch and Fr. Gulshan Barkat OMI, who recently visited the archaeological site of Skardu-Baltistan, carried out a study and in recent days gave a report on the Cross of Kovardo at the Pastoral Institute of Multan to Catechism Teachers present from various cities in Pakistan.
Speaking to Fides, Fr. Robert McCulloch, Procurator General of the Society of St Columban, notes: "This cross is an important discovery in Pakistan: and it does not only concern our history, but also the Catholic faith. History has a lot to teach us and archaeological excavations and studies relating to the cross will broaden and deepen this knowledge and understanding". The Australian priest, for over 34 years a missionary in Pakistan, observes: "The discovery of the cross is in no way a threat to the national or religious reality of Pakistan. This is an important testimony of the reality of the peoples who have lived for thousands of years in present-day Pakistan, especially in Skardu".
Fr McCulloch further stated: "There is great enthusiasm about the intellectual and archaeological challenges surrounding the discovery of the cross of Kovardo.
We look forward to the possibility of a Memorandum of Understanding between the University of Baltistan and the Pontifical Institute of Christian Archeology in Rome, to arrange for further studies in relation to this discovery". And he adds: "The International Association of Museums has expressed interest in protecting the place where the cross was found. Distinguished archaeologists in Italy and Hungary hope that the archaeological activity relating to the cross of Kovardo will fall within the terms of the existing Italian-Pakistani cultural agreement", he concludes. (AG-PA) (Agenzia Fides, 19/11/2021)

AFRICA/MOROCCO - Music, an instrument of joy and fraternity for the lives of children

ASIA/TURKEY - In the United Kingdom and Israel, new legislative proposals to sanction the recognition of the Armenian Genocide