VATICAN - Sister Gloria after her kidnapping as a religious: "I had to keep silent so that God could protect me" 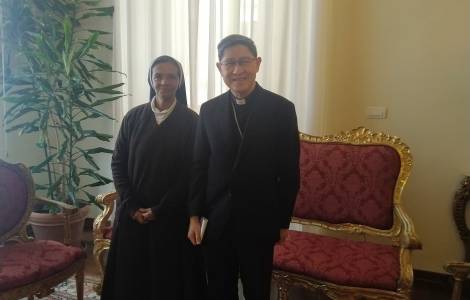 2022-01-03
On January 6, 1622, Pope Gregory XV founded the Congregation “de Propaganda Fide” for the reunification of Christians and the spread of the faith

Vatican City (Agenzia Fides) - It was on February 7, 2017 when a group of armed men entered the house of the Franciscan Sisters of the Immaculate Virgin Mary in Karangasso in southern Mali and took Sister Gloria Cecilia Narvaez Argoti hostage. The Colombian nun offered herself in place of a younger sister. The memory of Sister Gloria was kept alive through prayers, vigils, and meetings during the four long years and eight months she was held hostage. She never accepted the constant call to convert to Islam, and her leitmotif in the darkest days was that she had to be silent so that God could protect her.
While Sister Gloria was now waiting to be able to return to Colombia after her release, she stayed for a period of rest in the religious house in Riano near Rome. On Friday November 12th, on the occasion of a meeting with Cardinal Luis Tagle at the Congregation for the Evangelization of Peoples, she also spoke to Fides.

Fides: Sister Gloria, welcome back. We have prayed so much for you and we are honored to have you here. Would you like to tell us what your life was like before the kidnapping?
Sister Gloria: Before I was kidnapped, I was on a mission in Africa with my sisters, where we dedicated ourselves to the promotion of women. We taught them embroidery, machine sewing, reading, as well as offering tools that would allow the start-up of microcredit activities. One of our priorities has always been the care of children and newborns, who are often abandoned by their mothers on the day of birth because they have nothing to eat themselves. We ran a health center and helped the sick, including visiting their families. My actions and thoughts as a person and religious were geared towards encounter and closeness.

Fides: Four years and eight months is a long time. How did you live the many days as a prisoner?
Sister Gloria: In the morning I prayed and watched the sunrise in the desert, something wonderful, I felt the wind that rose sometimes violently and sometimes gently from the sand. I wrote letters to God in lumps of charcoal, expressing my limitless trust in Him. I gathered wood to heat what little water I got every day to prepare my tea. I always prayed for the freedom of the many hostages in the world and thought of the suffering of so many who die of starvation. All the moments in my life came back to my mind, the path I walked with the sisters in my congregation, my family, my life as a religious and the answer I gave to God's call. I also prayed for the groups that held me hostage, for each one of them. When it was time to move to another location, I packed up my things.

Fides: What was your idea of the length of your imprisonment? Did your captors explain the reasons for the permanent extension of your imprisonment?
Sister Gloria: All of the groups to which I was entrusted referred to religion. They all wanted to test my faith. For them there should only be Islam in Mali. I also think that there were problems among the various groups that delayed my release.

Fides: Over time, did you come to terms with this difficult experience that you had to go through?
Sister Gloria: Above all, it was an experience of deep faith for me, in which I strengthened myself in God, in which my trust in God grew by accepting all kinds of humiliation and oppression in order to be able to grow and live what our Foundress, Blessed Mother Charity Brader Zahner, used to say: "We must be silent so that God can protect us". At the same time, it was an opportunity for me to show respect for other religions, in this case your own, and I read the encyclical 'Deus Caritas est' by Pope Benedict XVI, which speaks of respect for religious freedom and the fact that we Christians must be ambassadors of peace and reconciliation through our attitude.

Fides: Were your captors always with you? How did you behave, were you treated badly?
Sister Gloria: In general, the groups humiliated me very much, they insulted me in an insulting and violent way because of my religion or because I am a woman. But even among them I saw that there were good people who wanted to set me free so as not to put me in such great danger.

Fides: Were there any particular gestures of humanity - or malice - on the part of the kidnappers towards you, which you remember?
Sister Gloria: Especially at night I saw that the men were very excited, they shouted at each other and approached the tent where I was trapped. In the middle of the night the leader would often come up to me and say: "Gloria! Are you all right?"

Fides: Your mother died waiting for your release and return. Isn't this pain, on top of the painful events of the kidnapping, too much?
Sister Gloria: I prayed a lot and thought about the fact that my mother was very old. I thought of the words she had said to me when I went home on vacation and then returned to Mali: "Don't go so far, because Mali is an Islamist country and something could happen to you or maybe you will never see me again". I replied, "Mom, let it be as God wants it to be. Something could happen to anyone. We are never sure what God's will is.

Fides: You met Pope Francis in the Vatican. Which sentence or gesture that Pope Francis addressed to you impressed you the most, and which one will you remember?
Sister Gloria: I will never forget his gesture of greeting and blessing as Father and Shepherd of our Church. Not even his request: "Pray for me".

Fides: Are you planning to go back to Africa and pick up where you left off? How do you see your future? What awaits you? And how has this experience changed your attitude towards life and the things in the world?
Sister Gloria: If God gives me health, I will continue to be a missionary, close to the poor and most needy, I will continue to raise my prayer of eternal gratitude to God, but I will be even more aware of the suffering of people without freedom and of those who are hungry and thirsty. I will continue to pray for peace in so many countries that are at war. For Pope Francis, the priests and men and women religious all over the world, so that we have the courage to give our lives for those who suffer. This experience leads me to see life as a task to create universal brotherhood. Not to close ourselves off, but to be bearers of hope and witnesses of our faith. One does not have to do many things, but rather to give a testimony of faith, to listen, to appreciate all those who need us, the elders for their wisdom and what they have contributed, the young for their courage and prophetic attitude. We must continue to pray to God that He may bring forth good and holy vocations for the Church that can reach distant places where almost no one else goes. As our Foundress used to say: God cannot be surpassed in his generosity, and we must not forget the good works that the Congregation has in his hands: the option for the poor and great charity and brotherhood with all. That means giving your life for someone else.

On November 15, 2021, Sister Gloria was finally able to return to Colombia, where she will stay with her family and fellow sisters for a while. (AP) (Agenzia Fides, 19/11/2021 Agenzia Fides) 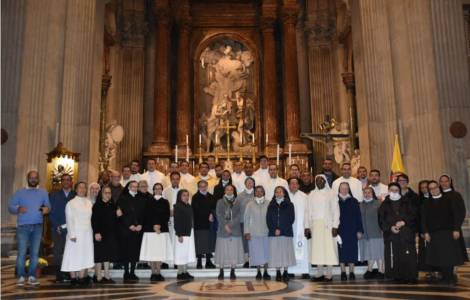