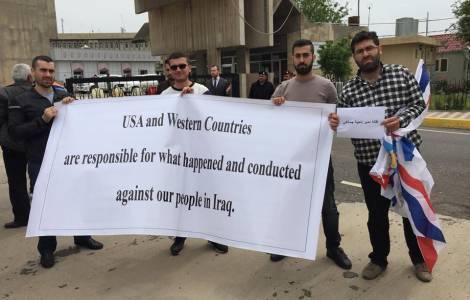 Dohuk (Agenzia Fides) - In the Autonomous Region of Iraqi Kurdistan, the collection of documents and complaints on the illegal expropriation of real estate - houses and land - suffered by Christian owners in recent decades continues without interruption. Local committees have initiated procedures to carry out a detailed mapping of illegally expropriated properties and to acquire information relating to the title deeds of the legitimate owners and the concrete circumstances in which the illegal expropriations occurred. On Wednesday, November 17, Reber Ahmed, Minister of the Interior within the government of the Autonomous Region, gave an account in a press conference, of the feedback received during his visit to the governorate of Dohuk to verify the data collection procedures initiated by the Commission established ad hoc last April on input from the regional government with the aim of countering the phenomenon of illegal hoarding of real estate belonging mostly to members of ethnic and minority faith communities, starting with Christians (see Fides, 14/4/2021). The Minister confirmed to the media that he had received encouraging information on the acquisition of complaints and materials acquired in this preliminary phase from committees set up on site, and in the meetings held with representatives of local administrations - including those of the governorate of Dohuk and the city of Zakho - confirmed the resolute intention of the regional government to proceed with a full legal restoration of property rights violated in recent decades to the detriment of Christian citizens and belonging to other minority groups. The material collected by the local committees will be submitted to the attention of the competent government commission, which will then have to define the concrete procedures for returning illegally expropriated land and houses to their legitimate owners both before and after the fall of Saddam Hussein's regime.
The establishment of an ad hoc government commission in charge of verifying and curbing the systematic illegal expropriations suffered in recent years by Christian owners in Iraqi Kurdistan (and especially in the governorate of Dohuk) made concrete an input expressed by the Government of the Autonomous Region in August 2020. The investigating commission will have to collect documentation, also listening to the requests and justifications of the parties involved to draw up a real mapping of the property of Christians turned into the object of abusive expropriation in the years in which the entire northern-Iraqi zone lived the dramatic experience related to the conquests of the Daesh jihadist militias and the creation of the self-proclaimed Islamic State.

Large-scale expropriations of land and real estate belonging to Chaldean, Syriac and Assyrian families in the Iraqi Kurdistan region, as reported by Agenzia Fides (see Fides, 14/4/2016 and 7/7/2016) were denounced with particular vehemence in 2016. According to the complaints submitted, the illegal expropriations were carried out by Kurdish fellow citizens, acting on their own account or in collaboration with other members of their tribal clan. Already at that time, Dr. Michael Benjamin, director of the Nineveh Study Center, reported that in the Dohuk governorate alone there was a list of 56 villages in which the area of land illegally stolen from Christian families amounted to 47,000 acres. On April 13, 2016, several hundred Syriac, Chaldean and Assyrian Christians from the Nahla region (Dohuk Governorate) organized a demonstration in front of the Parliament of the Autonomous Region of Iraqi Kurdistan (see photo) to protest against the illegal expropriation of their real estate assets suffered in previous years by influential Kurdish personalities, and denounced more than once, before a competent court.
In recent years, illegal expropriations have focused mainly on the lands and homes belonging to Christians who left the area especially since the 1980s, to flee regional conflicts and sectarian and tribal violence that exploded with greater virulence after the military interventions of international coalitions. (GV) (Agenzia Fides, 18/11/2021)