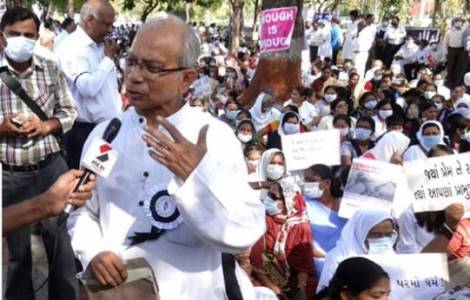 2022-09-26
Religious Forum for Justice and Peace: "Firm in faith, alongside the oppressed in the midst of tribulation"

2022-09-08
25 years after her death, Mother Teresa is for India an example of the following of Christ

New Delhi (Agenzia Fides) - "Social violence against Christians and Muslims in India is worrying and must be prosecuted. The federal government has not done enough to end the incitement to hatred against Christians and other minorities": says to Fides Father Cedric Prakash, Indian priest and Jesuit, journalist, popularizer and writer, who has just been awarded by the Indian Catholic Press Association (ICPA). On December 1, the Association will confer the prestigious "Louis Careno Award for Excellence in Journalism", in recognition of his daring writings against intercommunal violence and fundamentalism, which are gaining ground in the Indian subcontinent. Prakash, founder and former director of "Prashant", a cultural center based in Ahmedabad that raises awareness of human rights, justice and peace issues, "broke new ground with his incisive and thought-provoking writings on various social topics, political and religious. His in-depth analysis of socio-cultural and political issues has given rise to deep debates in civil society and in the secular world ", explains a note sent to Fides by the ICPA. In an interview with Fides, the Jesuit said: "Since the Bharatiya Janata Party (the Indian People's Party) took office in the government of India in 2014, religious minorities in the country, especially Muslims and Christians, have been subject to continuous assaults. They are intimidated, threatened, discriminated against and illegally imprisoned. In 2021, more than 300 attacks against Christians were recorded across the country ": Father Prakash recalls the sad story of his colleague Stan Swamy, who was unjustly arrested in autumn 2020, and died in hospital last July due to his deteriorating state of health. In recent years, he notes, linked radical groups which advocate Hindu religious nationalism, supporters of violence and intolerance, "enjoy greater impunity", thanks to cover-ups in politics, the justice system and law enforcement. Often, the perpetrators of the violence, he explains, "wrongly accuse Christians or missionaries of converting Hindus to Christianity through flattery, money or other forms of aid". Following this ideology, eight Indian states have enacted anti-conversion laws (innocently referred to as "religious freedom laws"), which "are aimed at preventing Indians from embracing Christianity or Islam". This approach, adds the priest, violates the Indian Constitution, which sanctions the freedom to preach, practice and profess one's religion for all citizens. At the ICPA award ceremony, Father Prakash will speak about "the urgency of protecting religious freedom, also thinking of the message that Prime Minister Modi addressed to Pope Francis during their recent meeting in the Vatican, when he invited him to visit our country", he said, stressing that it is a "crucial question for the life of Christians in India". (SDD-PA) (Agenzia Fides, 17/11/2021)

AFRICA/NIGERIA - Bishop of Orlu: "The military assault on the market of Eke Ututu risks alienating the support of the State from the population"