AFRICA/ETHIOPIA - The mission of the Salesians, at the service of young people and the poorest communities 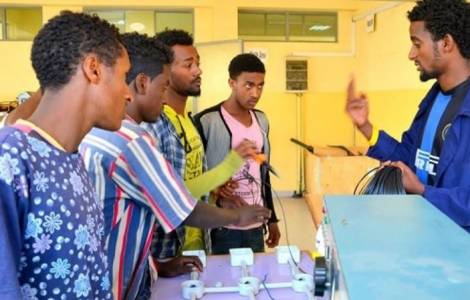 2022-01-19
Hundreds of innocent people lose their lives every day. An unprecedented crisis in Tigray

2022-01-18
"Food and medicine for the population! Humanitarian corridors must be opened": Tigray in the grip of heinous crimes

2022-01-17
Sisters detained in Addis Ababa released: they are all fine

Addis Abeba (Agenzia Fides) - Education, professional training, development projects, assistance to populations affected by famine, always according to the evangelical spirit of proximity: this is the commitment of the Don Bosco Missions in Ethiopia and of the VIS (International Volunteering for Development), their NGO. The presence of the Salesians in Ethiopia has come to the fore in recent days with the arrest of about twenty local religious (see Fides, 9/11/2021) and Alberto Livoni, a fifty-year-old Italian aid worker, representative of VIS. They are all held in custody in police stations. So far, it is still unclear why they were detained by the police and what judicial measures the authorities will take against them. According to information gathered by Fides, they are all in good health. That of the Salesians in Ethiopia is a presence since 1976, when the religious began to take care of local children and young people, using all their human, cultural, professional and economic resources for the good of the population.
"The Salesians were there during the famine that hit Ethiopia in 1983-85 and which caused one million deaths - sources close to the religious explain to Fides - and today they are suffering the Covid-19 pandemic, famine generated by the invasion of locusts and malnutrition that puts the lives of thousands of people at risk". The four missions of Macallè, Adua, Scirè and Adigrat, take care of thousands of children and young people from contexts of misery and with stories of violence, abuse and despair behind them. "Thanks to the donations of thousands of people - it is noted - thousands of children were welcomed into the Salesian houses of Don Bosco and were able to attend Salesian kindergartens and primary schools. Many street children have received professional training and work in their land ". In 1998 the missionaries were then joined by VIS (International Volunteering for Development), a non-governmental organization founded in 1986 as an expression of the National Center for Salesian Works and which is inspired by the message of St. John Bosco and his educational system. VIS works to build sustainable and lasting development for local populations.
In Tigray, a region devastated by a ferocious civil war, the "Wash" (Water and Sanitation) project was launched which aims to improve access to drinking water, basic sanitation and local water management capabilities and to promote food safety in collaboration with the local partner "Dgmda" (Don Gianmaria Memorial Development Association).
The activity is also carried out in the Somali Region, the eastern region of Ethiopia inhabited by Somalis. However, following the Salesian tradition, VIS is also involved in the sector of vocational training and education.
Within the Salesian technical schools of the Tigray region, in Gambella and in Addis Ababa, courses have been activated in graphic and typographic arts (with the creation of the first graphic school in the country), tailoring, food preparation and catering, woodworking , mechanics, leather goods and construction.
"To promote job placement - the VIS volunteers explain to Fides - we have developed a strategy, which we have adopted in Tigray and Addis Ababa, based on the organization of short courses in line with the labor market". Training activities were also carried out in refugee camps where, thanks to the collaboration of the Italian Agency for Development Cooperation, the Salesians tried to improve the living conditions of refugees in the Gambella and Tigray regions through strengthening their professional skills and starting work for potential Eritrean migrants and refugees through an innovative approach for the country, based on the organization of courses in line with the market, the promotion of self-employment and integration in companies through the support for public-private partnerships.
"Our first mission - conclude the sources of Fides - is either to build a tailor-made future for children and for the most disadvantaged communities. A future made up of opportunities and integration with the social fabric, a future within reach for those who in life have known only poverty and marginalization. Our entire commitment is extended to this spiritual and social mission. To this mission we dedicate all our resources and energies". (EC) (Agenzia Fides, 12/11/2021)

AFRICA/SUDAN - The commitment of Comboni missionaries: helping refugee minors from South Sudan to return to school

AFRICA/ETHIOPIA - The Salesians: we share what we are and what we have with the people who suffer

ASIA/CHINA - From Mariology to the Fathers of the Church: 20 years of "academic evangelization" of the Beijing Institute for the Study of Christian Culture