ASIA/LEBANON - The alarm of Catholic Patriarchs and bishops: let us resist the designs of those who want to annihilate Lebanon 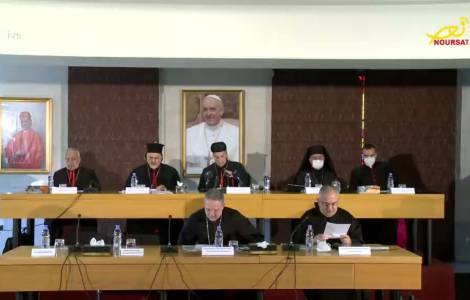 Beirut (Agenzia Fides) - Faced with the designs pursued by those who want to cancel the singular and unparalleled physiognomy of Lebanon from the Middle Eastern scenario, the only effective response remains that of returning to the founding "roots" of the Lebanese nation, drawing inspiration and criteria from them to face the systemic crisis that is gripping the Land of the Cedars. This is the "line" proposed by Cardinal Béchara Boutros Raï, Patriarch of Antioch of the Maronites, in the introductory speech he gave on Monday, November 8, at the opening of the Assembly of the Catholic Patriarchs and Bishops of Lebanon. In addition to Cardinal Raï, three other Eastern Catholic Patriarchs take part in the meeting, hosted at the Maronite Patriarchal See of Bkerkè (Melkite Youssef Absi, Syrian-Catholic Ignace Youssif III Younan and the newly elected Armenian-Catholic Patriarch Raphaël Bedros XXI Minassian) as well as numerous bishops and superiors general of the various Catholic ecclesial groups present in Lebanon.
In his opening speech, the Maronite Cardinal briefly recalled the constitutive factors of the institutional structure that characterize and protect the Lebanese peculiarity in contemporary historical events. First of all, Patriarch Raï valued the original distinction between political-state institutions and confessional dynamics which, albeit through paradoxical ways, has guaranteed pluralism and diversity as traits of Lebanese coexistence. The prevalence of belonging to the common nation over sectarian divisions - underlined the Patriarch - is the guiding principle to be reaffirmed if we do not want to see Lebanon sink into the quicksand of sectarianism. The National Pact of 1943, cited by the Patriarch in his speech, sealed the historical story of modern Lebanon by recognizing that the "status of neutrality" represents a sort of identity code of the Lebanese nation since its inception. Since that Pact, Lebanon has engaged in a policy of neutrality and non-alignment, based on the following principles: no protection, no protectorate, no privilege or privileged place available to any country, both from the East and from the West, but rather a status of a sovereign, free and fully independent homeland. Even the "Lebanese formula" which provides for the division of high institutional and political offices between Christians, Shiites and Sunnis - continued the Patriarch - represents an executive codification of the National Pact. This formula guarantees the sharing of Lebanese Christian and Muslim communities in the management of power. A sharing not conditioned by the potential changes in the demographic composition of the country. According to the Maronite Patriarch, only fidelity to these genetic traits of the Lebanese affair can guarantee continuity to the Lebanese historical experience, with all its precious "anomalies". Having moved away from those guidelines is at the origin of the crisis that overwhelm the country-system. And now - the Lebanese Cardinal noted - attempts to take advantage of the last year of Michel Aoun's presidential term as Head of State and the delicate pre-electoral season to "cancel" Lebanon and sabotage its fraternal relations are manifesting with growing boldness with other Arab nations. A disturbing scenario, in front of which - the Patriarch remarked - all those who care for the continuity of the Lebanese nation must react in a unified manner, without dividing.
Among the many political and social emergencies that besiege Lebanon, Patriarch Raï in the last part of his speech dwelt on the crisis of the Lebanese school system, and in particular on the state of particular suffering in which Christian schools find themselves, the backbone of the entire national educational offer. The tragic economic situation - the Lebanese Cardinal noted - makes it impossible for most families to pay school fees. Thus Catholic schools sink into debt, without finding any support from national political institutions. A drift destined to have long-term negative consequences on the young Lebanese generations, increasingly conditioned by processes of mass manipulation operating through social media. Thus - concluded the Maronite Patriarch - the heritage of dedication to the service of the nation represented by the work of Catholic schools, which John Paul II also in the Apostolic Exhortation "A new hope for Lebanon" (May 10, 1997 ) had called for preservation as a precious element of the ecclesial mission on Lebanese land. (GV) (Agenzia Fides, 8/11/2021)

AMERICA/MEXICO - Bishops: “Nothing must distract us from the essential task of education. Peace is possible. Educating to build it is a priority"

VATICAN - The China-Holy See Agreement and the treasure of faith