ASIA - Conflicts in Asia: Afghanistan and Myanmar the most serious cases 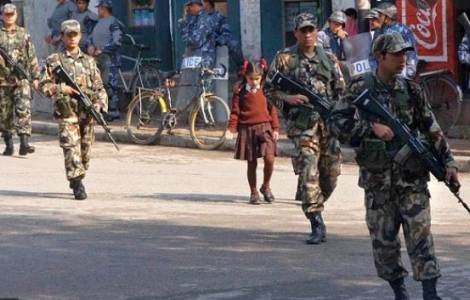 2021-11-11
Promoting peace in Afghanistan, Korea and Myanmar: the commitment of the Asian Conference of "Religions for Peace"

2021-11-06
Conflicts in Asia: Afghanistan and Myanmar the most serious cases

Rome (Agenzia Fides) - Seven countries in Asia experienced active armed conflicts in 2020 and 2021. There were three in South Asia: Afghanistan, civil war (major internationalized civil war), India (high-intensity, interstate border and subnational armed conflicts) and Pakistan (low-intensity, interstate border and subnational armed conflicts). A special case is represented by Myanmar, torn apart since February 2021 by an armed rebellion that can become a real civil war. In other states of Southeast Asia - Indonesia, the Philippines and Thailand - internal armed conflicts of low intensity continued, as reported by the 2021 Annual Report of the Stockholm International Peace Research Institute (Sipri). As regards to the total victims linked to conflicts in Asia, there were more than 20 thousand in 2020, according to the Report entitled "The state of conflict and violence in Asia 2021" drawn up by the "Asia Foundation", but there are also confirmed victims registered in 2021 in Mynamar.
Asia is the continent where in addition to the enormous suffering caused by the pandemic, there are also serious problems due to the situations of war in two countries: Afghanistan and Myanmar, reports the Atlas of World Wars and Conflicts (see Fides, 5/11/2021 ), also collecting the observations of Amnesty International which highlight the cases of patent violation of fundamental rights.
The cases of Myanmar and Afghanistan are the most serious. In the first, after the democratic transition that seemed guaranteed by the leadership of Aung San Suu Kyi, on February 1 the military junta at the head of the army (Tatmadaw) took power after a coup d'etat following free elections that had taken place concluded, in November 2020, with a victory by the National League for Democracy, led by the Burmese Nobel. To date, the coup can boast the sad record of more than 1,200 deaths in just 9 months and above all the risk that the country will fall into an endless civil war where, above all, the civilian population pays the price. Furthermore, as Fides has documented in recent months, the war on protesters has also proved to be a hunt for those who profess a religion other than Buddhism, as had already happened with the Rohingya Muslim population in past years: churches have been hit, oratories, shelters and many priests were persecuted especially if they gave refuge to those seeking protection in a temple.
In Afghanistan - as in part also in Myanmar - something unexpected happened: the victory of the Taliban after twenty years of war with a NATO-led coalition. If such a rapid military victory of the guerrillas had not been foreseen by any analyst, it is true that the arrival to power of the Islamist regime has put an end to the conflict, although not only the massacres of what remains of the Islamic State remain in the country (Khorasan Province), but violations and killings of opponents have been reported, even though the Taliban announced an amnesty.
If the serious economic situation, internal tensions and the struggle to expel the fighters of the Islamic State (in part also foreigners) do not turn into yet another civil war, the country will finally be able to stop counting the victims of the war on terror that began in 2001: at least 250,000 people including 100,000 civilians and 70,000 Afghan soldiers, 70,000 Pakistani civilians and military, and about 7,000 foreign soldiers. The challenge, according to the Atlas, now lies in the possibility of negotiations with the Taliban. The choice of dialogue, it is said, appears to be the only real alternative to war. (MG-PA) (Agenzia Fides, 6/11/2021)

ASIA/MYANMAR - The funeral of Catholic civilians massacred in Kayah