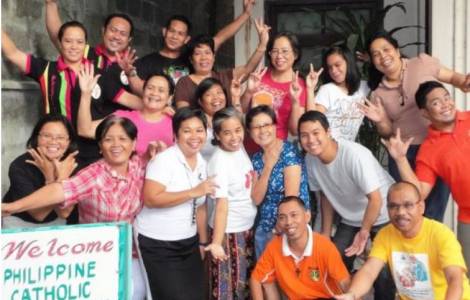 2022-01-03
On January 6, 1622, Pope Gregory XV founded the Congregation “de Propaganda Fide” for the reunification of Christians and the spread of the faith

Rome (Agenzia Fides) - "We received the gift of faith 500 years ago, but not only then: we invoke the Lord and we receive it from him even today. We received and lived it as Filipinos, and we give it to the world as Filipinos, in our peculiar way. In an archipelago of more than 7,500 islands, faith has spread between one island and another, in a fruitful exchange. Today many Filipino faithful, even if they do not consider themselves missionaries or have not studied missiology, are missionaries in the family, at work, they transmit faith with life. There are 10 million Filipino workers all over the world. This migratory movement has become a missionary movement. We have been called by God to be missionaries and to share the gift of faith". This is what Cardinal Luis Antonio G. Tagle, Prefect of the Congregation for the Evangelization of Peoples, said at the study Seminar organized by the International Secretariats of the Pontifical Mission Societies (PMS) and by the Pontifical Filipino College of Rome, on October 30, to celebrate the 500th anniversary of the arrival of the Gospel in the Philippines (1521-2021) and to reflect on the missionary spirit in the tradition of the Filipino faith.
The Seminar, held for a limited audience in attendance at the Philippine College - which in 2021 celebrates its 60th anniversary - was broadcast live via streaming on the web.
Fr. Dinh Anh Nhue Nguyen OFMConv, Secretary General of the Pontifical Missionary Union, organizer and moderator, underlines to Fides: "There was a precious interaction with all the National Directors of the Pontifical Mission Societies (PMS) connected. We reflected on the missionary spirit of the Filippino people, who were evangelized and then evangelized. We remember the motto of the 500th anniversary celebrations, 'Gifted to give'. The participation and the many speeches recorded suggest that we can organize a second session and also the intention to publish the Proceedings of the Seminar".
Among the various speeches, Fr. Andrew Recepcion, professor at the Faculty of Missiology at the Pontifical Gregorian University, highlighted the spirit and awareness of the call to evangelization in the tradition of the Filipino faith, while Father Greg Gaston, Rector of the Pontifical Filipino College in Rome , speaking of the Filipino diaspora in Italy, underlined the importance of the presence of Filipinos in Italy, "evangelizers with their simple life of faith, visible in many churches that swarm with Filipino believers".
"We think of all the nations where migratory flows are generated. The diaspora of the faithful, also referring to other nations of the world, can be a paradigm for the new mission of evangelization", noted Fr. Dinh Anh Nhue Nguyen OFMConv.
In the second part, the speeches, via web, of Bishop Socrates Mesiona, Apostolic Vicar of Puerto Princesa, and President of the Commission for the Missions of the Bishops' Conference of the Philippines and that of Father Esteban Lo, National Director of the Philippine PMS, in light of the contribution of the Pontifical Mission Societies to the Church and to missionary animation in the Philippines. Among the many different projects mentioned, it was recalled, by way of example, that the Pontifical Missionary Union supported in 2019 a project of "Formation for the clergy of the Apostolic Vicariate of Puerto Princesa", with a specific theological-pastoral updating program for the priests of the Vicariate. (Agenzia Fides, 3/11/2021)