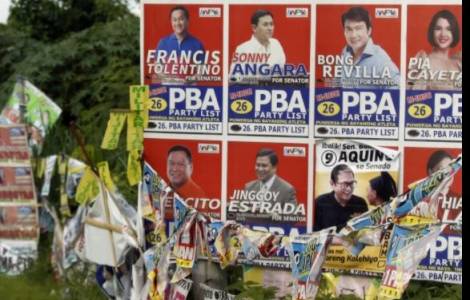 2021-12-18
The Silsilah Dialogue Movement: Christmas, a way of fraternal love to be announced to the wounded humanity

2021-12-09
The Year of St. Joseph ends, the lay commitment inspired by the saint begins

Manila (Agenzia Fides) - It is important and necessary to cast one's own vote according to one's own conscience: Mgr.Socrates Villegas, Archbishop of Lingayen-Dagupan emphasizes this with a view to the elections on May 9, 2022, for which more than 60 million voters have already registered. "People shouldn't vote for candidates who offer money to get votes", he said in a video message addressed to the faithful, stating that "buying and selling votes is a sin and against the law". "When people are in need, they can certainly accept offers and donations, including from political candidates, but this is not an exchange or an agreement: people are not obliged to vote for these candidates. You can accept cash donations not on the basis of a pact, but because there is a desperate need for one's family", said Mgr. Villegas, former president of the Bishops' Conference of the Philippines. The phenomenon of buying and selling votes is widespread in Filipino elections, although it goes against the "Omnibus" electoral code.
As the missionary of the Divine Word Father Bel R. San Luis SVD, a media expert, explains to Fides, "one of the main problems in the Filipino elections is that many voters sell their votes for a paltry sum. They do not take into account the competence, the skills and moral integrity of the politicians who buy votes. This is one of the main reasons the nation is not advancing as it should. People should choose wisely. The country's progress and success depends on good leaders". Candidates and politicians, Father Bel said, "today promise heaven and earth and service to society, but the point is that when they are elected they expect to be served and honored". For the Dominican Father Rolando V. De La Rosa OP, historian, former Rector of the University of St. Thomas in Manila, the Philippine elections are indeed "money-driven". Many candidates are willing to spend millions on posters, banners, T-shirts and advertisements, which are printed with their names and faces in order to be engraved in the memory of the voters and to get votes, explained Father De La Rosa. "Voters have a duty not only to elect candidates for public office, but also to give them the role they deserve, which is to be servants of the people rather than masters", he said. "Many citizens tend to become passive recipients of their goodwill after the election", said the priest, former president of the government's Commission for Higher Education (CHED). "The basic criteria for voting should be honesty and integrity", explains De La Rosa, "without being influenced by political advertising, polls and chances of winning." The priest therefore recommends that voters "carefully select those candidates who show a noble ambition and a sincere desire to serve the nation". The Election Commission is expected to release the final list of official candidates, including candidates for President, Vice-President, 12 Senators, and 308 House Representatives, in January 2022. In addition, there are votes for 81 governors and deputy governors, 780 seats in provincial councils, 1,634 mayors and deputy mayors of municipalities, 13,546 seats in local councils. According to the Philippine Constitution of 1987, general elections take place every six years on the second Monday in May. (SD-PA) (Agenzia Fides, 3/11/2021)

AMERICA/CHILE - Bishops to President-elect Gabriel Boric: "The Country entrusts you with a great mission"

AMERICA/HAITI - Twelve years after the earthquake: Redemptorists inaugurate the parish church of St. Gerard after being rebuilt