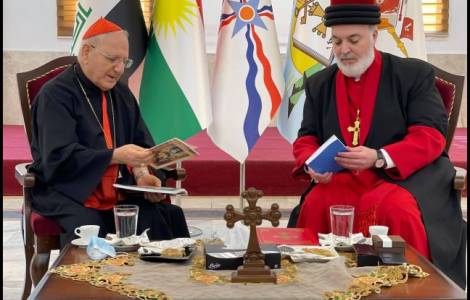 Erbil (Agenzia Fides) - The condition of the indigenous Christian communities in the delicate historical phase crossed by Iraq and the future that awaits them in the lands of their millenary roots were at the center of the visit made on Thursday, October 21 by Chaldean Patriarch Louis Raphael Sako to Mar Awa III, newly elected Patriarch of the Assyrian Church of the East. Cardinal Sako, at the head of a small Chaldean delegation, was received by Patriarch Mar Awa at his residence in Ankawa, a predominantly Christian suburb of the city of Erbil, capital of the autonomous region of Iraqi Kurdistan. In addition to expressing his congratulations on the patriarchal appointment, the Chaldean Patriarch wished his Assyrian counterpart to be able to serve the ancient Assyrian Church of the East with dedication and joy, also working for the unity of the baptized.
The Iraqi cardinal - - according to the official sources of the Chaldean Patriarchate - also brought a ring and some liturgical books as a gift to Mar Awa. Mar Awa, born David Royel, was elected the 122nd Patriarch of the Assyrian Church of the East on September 8, succeeding Patriarch Mar Gewargis III Sliwa, who already in February 2020 announced his resignation from the patriarchal office for health reasons. In the first congratulatory letter that Cardinal Sako had sent on September 9 to Mar Awa from Budapest - the city where he was taking part in the 52nd International Eucharistic Congress - Patriarch Sako had expressed the full willingness of the Chaldean Church "to cooperate with you" in common service to the baptized and to all Iraqi citizens.
The new Assyrian Patriarch, Mar Awa, as previously reported by Agenzia Fides (see Fides 9/9/2021), comes from the USA and studied in Catholic academies, including the Pontifical Oriental Institute. Before being elected Patriarch, he was Bishop of the Assyrian diocese of California (USA) and Secretary of the Holy Synod. Born 46 years ago in Chicago, and therefore the son of the Assyrian diaspora in the USA, David Royel was ordained a deacon at the age of 17, and later earned degrees in sacred theology from Loyola University in Chicago (founded in 1870 by the Jesuits) and at the University of Saint Mary of the Lake, also known as "Mundelein Seminary", a historic institute in charge of the theological and spiritual formation of Catholic priests in the Archdiocese of Chicago. Subsequently he obtained a licentiate in Sacred Theology and a doctorate from the Pontifical Oriental Institute in Rome. He was ordained bishop by the then Patriarch Mar Dinkha IV in 2008, taking the name of Awa (which means "father" in the Assyrian language) and became the first bishop of the Assyrian Church born in the US.
The Assyrian Church of the East has never had direct dogmatic conflicts with the Bishop of Rome. The official theological dialogue between the Catholic Church and the Assyrian Church of the East started in 1984, and led to the common Christological declaration of 1994, which confessed the faith in Christ shared between Catholics and Assyrians. Now, this fraternal theological dialogue is continuing on the theme of the sacraments and the sacramental life of the Church.
Since 2001, the Assyrian Church of the East has authorized experiences of Eucharistic hospitality with the Chaldean Church, in pastoral situations that require it. A future joint document between the Catholic Church and the Assyrian Church of the East could officially attest to the mutual recognition of the validity of the sacraments celebrated and administered in the two Churches. The theology and spirituality of the Assyrian and Chaldean Churches strongly emphasize the human nature of Christ. This spiritual perspective could not be more valued as a fruitful way for the Christian proclamation in the present time.
In September 2013 Louis Raphael Sako, who had just become Patriarch of the Chaldean Church, had addressed an official invitation to the then Assyrian Patriarch Mar Dinkha IV to begin together a journey of dialogue to restore full ecclesial communion between the Chaldean Christian community - united with the Bishop of Rome - and the Assyrian one. "I take this opportunity" the Chaldean Patriarch wrote to the Assyrian Patriarch at the time "to express the desire of the Chaldean Church to begin dialogue for unity, which is the desire of Jesus. The beginning of this dialogue is urgent today, in the face of great challenges that threaten our survival. Without unity, there is no future for us. Unity can help safeguard our presence" (see Fides, 16/9/2013). The proposal has not had any developments, even if at the beginning of October 2013 Patriarch Mar Dinkha had responded positively to the appeal of the Chaldean Patriarch, suggesting the creation of a "Joint Committee" as a tool to address together the urgencies shared by the two sister Churches, which share the same liturgical, theological and spiritual patrimony. (GV) Agenzia Fides, 22/10/2021)

EUROPE/HUNGARY - Russian Metropolitan Hilarion: Orthodox and Catholics share the same faith in the real presence of Christ in the Eucharist