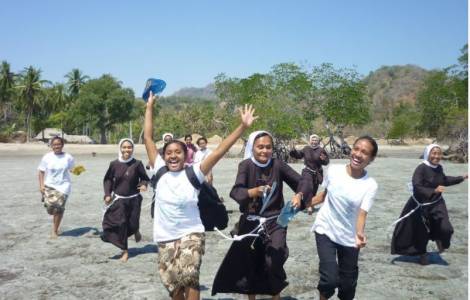 2021-10-18
Abolition of the death penalty: a civil society campaign

2021-09-15
"Bringing the face of Jesus to the most abandoned places": the Sisters of the Holy Face and their mission among the last

Vatican City (Agenzia Fides) - It was the invitation of the Virgin Mary "Go, O my Handmaids", to push the Congregation of the Franciscan Handmaids of Mary, an Italian religious institute, born in Tuscany, to go to distant lands and to launch missions in Indonesia and Colombia. This was explained by Sister Alessandra Dalpozzo, Mother General of the Franciscan Handmaids of Mary, who presented the missionary activity of her congregation during the conference held on October 21, in the Vatican. The Franciscan Handmaids of Mary were born in 1744 in Quadalto, Palazzuolo sul Senio, in the province of Florence, from the adhesion of three girls to the invitation of the Blessed Virgin, who appeared to them in a dream, who told them: "Go, oh my Handmaids".
The nuns, who have Mary as their model in the attitude of listening, contemplation and offering, unite the contemplative spirit with that of the apostolate, carried out in parishes, in popular missions, in education, in youth ministry and in assistance to the poor and the sick.
In particular, in 2009, driven by the same invitation to "go forth" and "go to bring the Gospel to the ends of the earth", the presence of the congregation began in Atambua, on the island of Timor, in Indonesia. It was the first "Mission ad gentes" of the sisters, called there by the Diocese which entrusted them with the care of two boarding schools. The colleges, named after St. Teresa of Avila and St. Maria Goretti, host a total of about 150 girls and give the local teenagers, from very poor families, the opportunity to attend high school.
Sister Alessandra recalled the decisive contribution of the Pontifical Society for the Propagation of the Faith which, by offering them a subsidy, allowed the construction of the chapel at the center of this mission, a place of prayer, spiritual life, celebration and community aggregation. Sister Alessandra recalls: "Wherever we are called to work, in every place of the world, we feel that those are also places chosen by Mary, where we want to be her handmaids, where we feel involved in being in the Church and in the mission of the Church; we wish to be builders of peace, that peace, gift of Christ who died and rose for us". (ES) (Agenzia Fides, 22/10/2021)

ASIA/KAZAKHSTAN - A "linguistic revolution" for evangelization