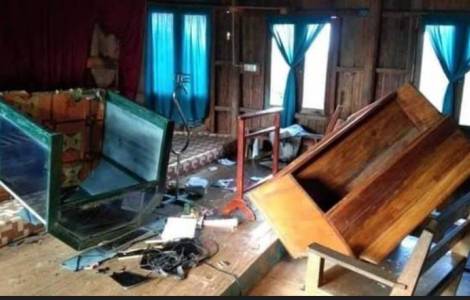 Hakha (Agenzia Fides) - The military in Myanmar devastated a Baptist church after attacking the village of Tlang Rua in the diocese of Hakha, in the Burmese state of Chin, in the northwestern area of Myanmar, and encamped inside the church. As Fides learned, they also burned 12 houses in the attack on the village, which took place on October 19. When the locals heard the arrival of the army in the area, more than 1,200 inhabitants of the area fled to the forest where they are now hiding, enduring heavy rain and cold.
Baptist Pastor Rev. Thawng condemns "the blind violence of these acts against civilians, justified by raids against the rebels" and, noting that such acts against churches are being repeated frequently, says that "the military of Myanmar have become thieves and terrorists". "No one was killed, but this is an act to be strongly condemned, it is a cowardly, fanatic and anti-religious behavior of the military", said Catholic priest Fr. Francis Suan, resident living nearby.
The violence occurred a few days after the fire of an entire village, including a Baptist church in the village of Rialto, also in Chin, on October 13. The recent episodes that see Pastors, villages, Christian places of worship as victims are raising questions in the community of believers in Myanmar. Fr. Noel Hran Tin Thang, Burmese priest, notes to Fides: "In the general atmosphere of violence, we see attacks on Christian churches, but no destruction of Buddhist pagodas. Why? Members of the resistance forces are Burmese of all religions and ethnic groups. Why this fury against Christians?". The faithful recall that last month Myanmar soldiers killed Cung Biak Hum, 31-year-old Baptist Pastor, as he rushed to help put out a fire caused by military bombings in the Chin state, (see Fides, 22/9/2021). His body was also brutalized. There are 20 episodes documented by human rights groups, by the mass media, by Church staff, in which Christian churches, ecclesiastical leaders and volunteers are hit or involved in the crossfire: buildings of worship hit by rockets, parish priests and faithful arrested, use of churches as military bases. The military often justifies attacks on churches by claiming that rebels are hiding in buildings.
The Catholic faithful and other confessions are afraid and fear a targeted reprisal against Christian communities and for this reason they are afraid to go to churches for their liturgies. As clashes continue between the regular army and the People Defense Forces, it is often priests such as Father Celso Ba Shwe, Apostolic Administrator of Loikaw, Kayah state, who reach the people, to bring comfort and hope, by going to the various districts to bring the Sacraments. "Following in the footsteps of a Good Shepherd, we go out to give spiritual food, consolation, solidarity, in the name of Christ", Father Celso told Fides. "Since the beginning of the political and social crisis, churches have provided shelter to people fleeing the conflict, according to a welcome and humanitarian aid work", local priests and religious explain to Fides, health care is also provided in many churches, hospitals, dispensaries, Christian structures such as the well-known "Clinic of Compassion" in Loikaw.
It should be noted that Christians in Myanmar (about 6% of the population, 90% Buddhist) come mainly from areas of ethnic minorities and for this reason they suffer an ancient hostility from the army, both for their ethnicity and for their religion. The Bamar ethnic majority, predominantly Buddhist, in fact, is prevalent in politics and in the army, and in the past the cultural and social promotion of religious nationalism (of Bamar-Buddhist brand) marginalized minorities.
According to the latest 2016 census, Christians in Myanmar are mainly concentrated in the Chin, Kayah and Kachin states. In the Chin state (to the west, on the border with India) about 85% of the 478,000 residents are Christians; in Kayah (on the border with Thailand in the south-east) 46% of the 286,000 inhabitants claim to be Christian; in the state of Kachin, in the far north of Myanmar, on the border with China, 34% of 1.6 million inhabitants are Christian.
Military violence against Christian minorities is part of the wider repression of the resistance movement, spread throughout the country, which is putting the population to the test. The United Nations said 3 million women, children and men are in urgent need of assistance and protection in post-coup Myanmar due to conflict, food insecurity, natural disasters and the Covid-19 pandemic. (PA-JZ) (Agenzia Fides, 22/10/2021)