ASIA/MONGOLIA - The Apostolic Prefect: mission is nourished with the depth of faith 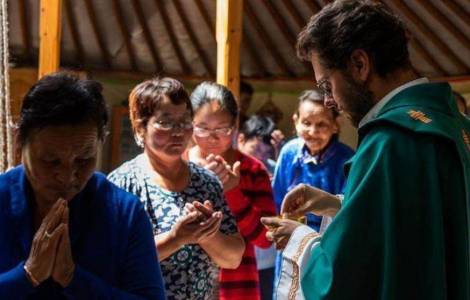 2022-07-01
Msgr. Marengo: "Accompany the faithful on their journey with the light of the Gospel"

2022-05-30
The Apostolic Prefect Marengo, appointed Cardinal: "That of the Pope is a missionary gesture"

2021-10-20
The Apostolic Prefect: mission is nourished with the depth of faith

2020-04-02
Appointment of the Apostolic Prefect of Ulaanbaatar

Ulaanbaatar (Agenzia Fides) - Moving from "promptness" to a dimension of greater "depth". This is the need for the near future for the Church in Mongolia, according to what was highlighted by Msgr. Giorgio Marengo, Apostolic Prefect of Ulaanbaatar, in the recent webinar "The mission of evangelization in Central Asia in times of Evangelii Gaudium", promoted by the Pontifical Missionary Union.
Taking stock and illustrating the perspectives of the mission in Mongolia, the Bishop said: "Trying to retrace this first thirty years of formal presence of the Catholic Church in Mongolia, the feeling is that it all began within a providential conjuncture of favorable events, which led one of the most closed Countries in the world to suddenly open up to missionary work. As Fr. Jeroom Heyndrickx, one of the first missionaries who came here in 1991, said, 'for some reason it seemed as if everything had to be done quickly and everything happened quickly'. In the wake of this fast start, the numbers of works set up by the missionaries who joined the first group are equally surprising. If the rapidity of the beginnings had its undoubted advantages, now perhaps it is time to go deeper, thinking above all of the life of faith which must be able to nourish itself with contents appropriate to reality and a practice that reflects and continues to inspire them".
According to Msgr. Marengo, "depth means long times of adequate inclusion, a slow effort to learn the local language and above all to get in tune with the beating heart of this culture, which is embodied in the individual people met. It also means accompanying the journey of each brother and sister who, touched by Grace, begin to re-read their personal and collective history in the light of the Gospel". This renewed "rhythm" can represent, according to the prelate, an effective response to the new needs of Mongolian society, which has experienced, just like the Church in that area, an extremely rapid development: "Rapid economic growth is accompanied by an increased proportional complexity of society. If already at the time of socialism there were two Mongolians, the urban one of Ulaanbaatar and the rest of the country, still marked by the ancient rhythms of nomadism, the difference today is in part even more striking, but with greater complexity, because the lifestyles mix and compare with the trends of the globalized world".
Priority, points out Msgr. Marengo, is to promote an announcement and pastoral care that are attentive to the specificities of the Mongolian people and its infinite nuances: "Today's Mongolia probably does not 'need' the Catholic Church to make up for the shortcomings of its welfare system and indeed does not like 'our noble initiatives. The commitment to human promotion will always continue, because it belongs to the very nature of the mission, but it should not make us lose sight of the genuine tension towards the formation of Christian life and its ethical-liturgical dimension. The risk is to get a little lost in the many projects and to let the freshness of the witness of faith fade".
According to the Bishop, the proclamation of the Gospel in Mongolia should be "whispered": "It is an expression of the Archbishop Emeritus of Guwahati, Thomas Menamparampi, SDB, who applied it to the Asian continent in general. 'Whispering the Gospel to the Soul of Asia' is for him a synthetic way of indicating the beauty of the perennial Christian proclamation, in the delicacy of its incarnation in the land of Asia. The mission understood in this way reflects his profoundly relational and spiritual dimension well, while remaining embodied in every single culture", he concluded.
In Mongolia, Christianity has deep roots of Syriac origins present in the area since the tenth century and then frozen by the epic of the Mongol Empire and by atheism imposed during the twentieth century. In 1991, in the aftermath of the peaceful democratic revolution, a group of Mongolian diplomats asked to establish relations with the Holy See: it was the beginning of a very fast process which in a few months will first lead to the establishment of the aforementioned diplomatic relations and then upon the arrival of the first three Missionaries of the Immaculate Heart of Mary.
The local Catholic community today has just over 1,300 baptized, compared to almost 63,000 Christians of other denominations (which in any case does not exceed 2% of the entire population), according to a recent Protestant census. There are 64 Catholic missionaries, of whom 22 priests (17 men religious and 5 diocesan), 35 women religious, 3 non-religious priests, 3 lay missionaries and 1 bishop, belonging to 10 religious congregations and 2 dioceses, with 24 nationalities represented. The local clergy counts only one priest and a deacon, close to presbyteral ordination. (LF-PA) (Agenzia Fides, 20/10/2021)

ASIA/CHINA - "Lord, it is good that we are here". The "Feast of the Elderly" celebrated in Chinese Catholic churches

ASIA/CHINA - "Lord, it is good that we are here". The "Feast of the Elderly" celebrated in Chinese Catholic churches