AMERICA/ARGENTINA - "Let us renew our missionary and evangelizing ardor": the martyrs of Zenta will be beatified 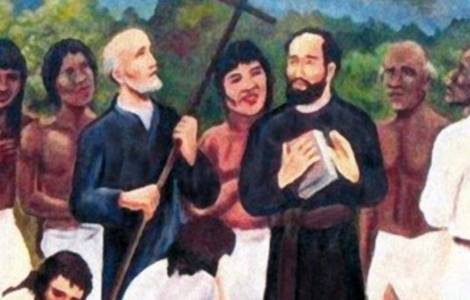 2021-10-30
All Saints' Day: Litanies of Argentinian Saints and Blessed

2021-10-15
"Let us renew our missionary and evangelizing ardor": the martyrs of Zenta will be beatified

San Salvador de Jujuy (Agenzia Fides) - "With the same love with which Don Pedro launched himself into evangelization, making us discover the richness of God's love for every man, so we renew our missionary and evangelizing ardor as the best response to this gift we have received". This was written by the Bishop of Jujuy, Monsignor Daniel Fernandez, in a message to the faithful of his diocese after the news of the recognition of the martyrdom, and therefore of the forthcoming beatification, of Fr. Pedro Ortiz de Zarate and his fellow martyrs, known as "the martyrs of Zenta".
In fact, on October 13, the Holy Father Francis authorized the Congregation for the Causes of Saints to promulgate the Decree on the martyrdom of the Servants of God Pietro Ortiz de Zárate, diocesan priest, and Giovanni Antonio Solinas, a professed priest of the Society of Jesus, killed in hatred of the faith on October 27, 1683 in Valle del Zenta (Argentina).
"For us it is a great blessing of the Lord - writes Monsignor Fernandez - that an inhabitant of Jujuy, who was parish priest of our Cathedral, and even before in his civil life was elected mayor of San Salvador three times, is raised to the altars. His remains were buried under the site that the Jujuy Cathedral occupies today in a place that, unfortunately, we cannot identify. We only know that his mortal remains were transferred with great devotion and meditation to this site to give him a Christian burial".
The Diocese of San Ramón de la Nueva Orán has initiated and pursued the cause of beatification, notes the Bishop of Jujuy, who underlines: "the gift of this blessed, model of bridegroom, father, public man, priest and missionary, is a great impulse for our pilgrim church in Jujuy. We must feel encouraged and committed to honoring Don Pedro by living the heroism of the witness of faith, hope and charity".
Monsignor Luis Antonio Scozzina, Bishop of San Ramón de la Nueva Orán, when communicating the news to his faithful writes: "In the context of the 60 years of the creation of the Diocese and after a long process of study, this news is a sign of the providential love of God in the missionary vocation of this Church of Nueva Orán. The recognition of the sanctity of this missionary community, made up of these pastors and a group of lay people, including Spaniards, Creoles, mulattoes and members of the indigenous communities of Humahuaca and Jujuy, is a reason for joy and consolation for the faithful people".
Pedro Ortiz de Zarate was born on June 29, 1626 in San Salvador de Jujuy (Argentina), into a family of Basque origin. At 17 he married and had two children. A widower, he followed the vocation to the priesthood, was ordained in 1657. His life was marked by intense apostolic activity among the indigenous people, by his commitment to prayer and divine worship, to sacred music and the administration of the sacraments to the poor and the sick. Giovanni Antonio Solinas was born in Oliena, in the province of Nuoro (Italy) in 1643. In 1663 he entered the Society of Jesus. In the first months of 1672 he showed his superiors his missionary vocation, oriented towards the American aborigines. His first field of apostolate was the Reducciòn of Itapùa (Paraguay), where he distinguished himself for his apostolic zeal and charity towards the natives. In 1683 he was sent to the Chaco mission, together with the Servant of God Pedro Ortiz de Zárate, with whom he shared the same death on October 27, 1683 in the Zenta Valley (Argentina). They were in that area together with 18 lay people, including some converted Indians, and after celebrating Mass they were attacked by the aborigines belonging to the Tobas and Mocovíes tribes. Their bodies showed signs of violence and torture. (SL) (Agenzia Fides, 15/10/2021)

EUROPE/ITALY - Vietnamese martyrs, a source of encouragement for Catholic communities

AFRICA/ALGERIA - Message and spiritual legacy of the monks of Tibhirine, 25 years after their tragic death

EUROPE/ITALY - Sandra Sabattini, a young woman who loved the poor for the love of God, will be beatified on World Mission Sunday

AMERICA - The Bishops of Central America: "let's leave our churches and set out to announce the Good News of the Gospel"

ASIA/INDONESIA - Pastoral care of "agroecology" to build the "common home"

AMERICA/PARAGUAY - Respect for indigenous peoples, agrarian reform, promotion of the common good: open letter from the Bishops to the authorities