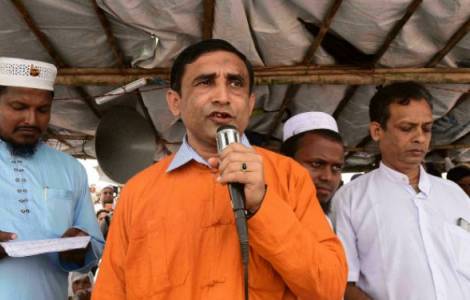 2021-11-04
A Protestant Bishop: it is urgent to set up an interfaith teaching program in schools to fight intolerance

2021-10-25
Cardinal D'Rozario: guaranteeing dignity and protection to the Rohingya

Cox's Bazar (Agenzia Fides) - "We are deeply saddened to see that our leader of the Rohingya community Mohib Ullah, founder of the Arakan Rohingya Society for Peace and Human Rights (ARSPH) was killed by the self-proclaimed Arakan Rohingya Salvation Army (ARSA).
It is such a painful and unforgettable loss for our Rohingya community. We extend our deepest condolences to his loved ones and his family; our prayers are always with them": this is what is stated in a joint statement by the Rohingya Christian community in diaspora, present in Bangladesh, India, Australia, America and Europe. The text, sent to Fides, calls for an urgent investigation after an important Rohingya leader, Mohib Ullah, a former teacher, was killed on September 29 in Cox's Bazaar. Mohib Ullah represented the Rohingya community at the United Nations Human Rights Council in 2019. The statement sent to Fides states: "This murder is not the first incident in the Rohingya community. Since 2012 there have been multiple attacks on Hindu Rohingya, Muslim Rohingya and Christian Rohingya. On January 26, 2020, Christian Pastor Taher and Hadir Hussain were kidnapped, we do not know where they are and their bodies have not been found. We have suffered the destruction of a church and schools, intimidation, sexual assaults, threats, several people have been forcibly converted to Islam. We strongly condemn the atrocious and inhumane attack by the ARSA on the leader of our Rohingya community, Mohib Ullah, and the repeated threats to the members of the ARSPH".
The statement continues: "With this brutal attack and other immoral activities, ARSA proves to be against humanity, Rohingya ethics and our prosperity. Therefore, we Rohingya Christians in the diaspora call on the government of Bangladesh to ensure the safety of all Rohingya refugees in the camps and bring those responsible to justice. We also urge the entire Rohingya community, around the world, to stand firmly together and to speak out against ARSA for its inhumane activities in refugee camps in Bangladesh. These should be stopped immediately". Mohib Ullah's family and those close to him blame the murder on the Arakan Rohingya Salvation Army (ARSA), a Rohingya militia fighting against the Myanmar army. But the ARSA denies its involvement in the murder and calls for an investigation to catch the real culprits. Cox's Bazar police have arrested four suspects and the investigation is ongoing. Mohammad Jobair, a collaborator of Mohib Ullah, tells Fides that Mohib Ullah arrived in Bangladesh during the Rohingya exodus from Myanmar in 2017. His organization ARSPH documented the human rights violations suffered by the Rohingya in Myanmar in 2016 and 2017. Mohammad Jobair states: "Mohib Ullah worked for the rights of the persecuted Rohingya. He wanted to return to Myanmar with dignity, safety and protection, but he had received death threats for some time. Some Rohingya do not want to return to Myanmar. Some are involved in drug trafficking. Crimes, human trafficking and drug trafficking are on the rise in the Rohingya camps in Cox's Bazar".
The Catholic aid worker Ranjit Reberio, who works for an NGO that helps the Rohingya community in Cox's Bazar, explains to Agenzia Fides: "The murder of Mohib Ullah is a great loss for the Rohingya community. He worked as the voice of the persecuted Rohingya. He wanted to return to his birthplace, but he was killed. The international community should put pressure on Myanmar to bring back the citizens who have fled to Bangladesh". Recently, Sheikh Hasina, a female Prime Minister of Bangladesh, said: "For some international actors, refugees are just a business. If there were no refugees, they would have no work. Nobody wants to say it out loud. I am disappointed by the international response to the repeated requests for help from Bangladesh to get the citizens of Myanmar back to their country". (FC) (Agenzia Fides, 15/10/2021)