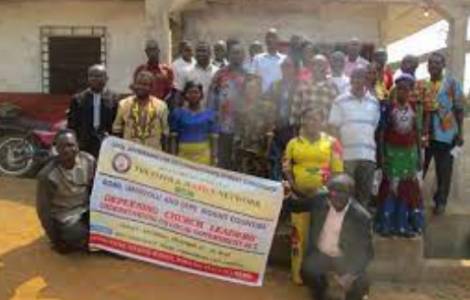 2021-10-23
Fire at the headquarters of the Catholic Secretariat of the Bishops' Conference: "I ask all of you to pray for us", says the National Director of the country's Pontifical Societies

2021-09-01
Catechists in Africa: reference point for Christians of small communities

2021-06-22
A missionary: "Alongside the people in a local Church that is taking its first steps"

Tubmamburg (Agenzia Fides) - "We are all invited to continue to work for the respect of human rights and dignity which is above any religion", writes from Tubmamburg to Fides Fr. Firmin Konan Moiyé Kouassi, priest of the Society for African Missions (SMA).
"We are facing many things in Liberia - explains the missionary: from the preparations for the new elections of the President of the Republic in a year and a half, with a strong opposition and militants who multiply. We lost Fr. Charles Edmund Boyce, appointed Apostolic Administrator in June 2021 and died on September 19, and we currently have a new diocesan Administrator. The late Apostolic Administrator was very involved in interreligious dialogue and ecumenism. A further testimony of his openness was the moving participation of Catholic faithful, clerics and religious of other faiths at his funeral, celebrated on October 1 in the Cathedral of the Sacred Heart in Monrovia". In the note sent to Fides, Fr. Firmin, who is parish priest of Saint Dominic in Tubmamburg, county of Bomi, as well as responsible for "Justice and Peace, Integrity of Creation", at the level of the SMA of Liberia, recounts the great involvement of Fr. Boyce who was originally from Gbapolu county, an area dominated by Muslims. "He had experienced living and sharing with people of other faiths from an early age. As a priest, he generously represented Catholics in the Council of Churches of Liberia, organized numerous seminars with traditional African believers and meetings with the Islamic community. As Vicar General of Archbishop Emeritus Lewis Jerome Ziegler, Father Charles was often involved in discussions on good governance and human rights". "We must all discover together what we have in common - concludes Fr. Firmin - what drives us to communion. The country to be preserved, the economy to be improved, the peace to be maintained, the land to be protected ... many things still could be added for which to work together".
For some time now, Liberia has been in a dire situation: inflation continues to rise, unemployment, Covid-19 and the September 5 coup in Guinea, which overthrew President Alpha Condé and handed over power to the coup leader, Lieutenant-Colonel Mamady Doumouya. In an attempt to contain this emergency, President Weah ordered national security forces to step up vigilance around border areas, fearing an influx of Guinean citizens to the border. (FKMK/AP) (Agenzia Fides, 13/10/2021)