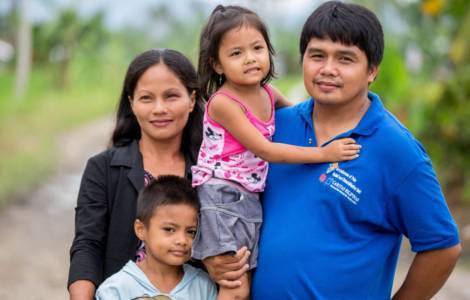 2021-10-13
The Bishops: "let us raise our voices and defend the truth about the dignity of the human being, the sanctity of life and marriage"

2021-10-02
March October 3 in favor of women and human life: for the Bishops it is "an expression of love for women and for life"

2021-09-21
The Bishop of Veracruz on migrants: "the position of the Church is to protect and help them while they are in our land"

Mexico City (Agenzia Fides) - After the intentions expressed by some local legislators to propose a reform of the Civil Code of the State of Mexico to redefine the natural marriage between a man and a woman, the Mexican Bishops address themselves to "all the Catholic people, to all those who share our faith in the Lord Jesus Christ, to all believers of other religions and to all people of good will", inviting them to unite "to defend the original truth of marriage in which we believe, with its immutable anthropological structure and its purposes for the benefit of society".
The Episcopal Conference of Mexico, "fulfilling its mission of proclaiming the Word of God", therefore launches an appeal to join forces: "Faced with the strange legislative initiatives that we see emerging throughout the country against the sanctity of life , marriage between a man and a woman and the family, we launch an urgent appeal to raise our voices together, organize ourselves and defend the truth about the dignity of the human being, the sanctity of life and marriage between a man and a woman, from which the family is born, the fundamental cell of society".
In their message, the Bishops recall that "marriage between a men and a women is the cultural heritage of all peoples, based on biblical anthropology", whereas today some claim to call "marriage" the unions between people of the same sex, and are even trying to legalize this phenomenon in the legal field of the State of Mexico. "This is an action against the natural anthropological status", they reiterate, underlining that "between the two realities there are no analogies, not even remote ones: they are different realities that require different legal approaches!" and, without a discriminatory spirit, they ask to distinguish "private personal choices or those of groups that prefer and choose from the beginning a model of life different from God's plan for human love".
The text of the Episcopal Conference therefore underlines: "Starting from faith we have the right to teach, express and defend the original truth of the natural reality of marriage created by God, demanding that it be respected in the juridical and not intended to redefine what God has established.
We are part of a Mexican society and we are assisted in this request by the human right to religious freedom".
To legislators who promote the initiative to redefine natural marriage, the Bishops ask "to respect their right to religious freedom and to become aware that their proposal is unsustainable and threatens the social good". Lawmakers who share their faith in Christ have "a moral duty to express their disagreement clearly and publicly". Finally, the Bishops ask all legislators to "strengthen representative democracy, to legislate for the majority, not for minorities, to find, if they are lacking, legal guarantees for them, but without violating majorities".
At the conclusion of the message, they renew the appeal: "For the good of the nation and for a better future, let us not remain silent or passive in the face of such initiatives against the sacred gift of life, from conception to natural death, and against the family that comes from natural marriage". (SL) (Agenzia Fides, 13/10/2021)