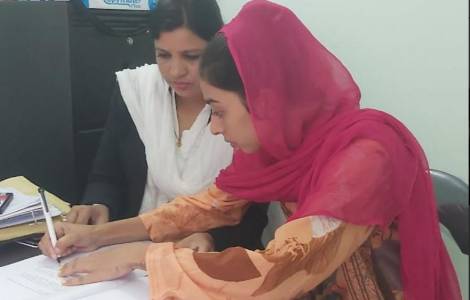 2021-11-30
The Apostolic Nuncio to young people: education is crucial for your future

2021-11-19
The cross of Kovardo and symbols of the Christian faith in Northern Pakistan: new studies are being prepared

2021-11-09
The bill to protect women rejected: protest campaign by Christians

Lahore (Agenzia Fides) - The government must make every effort to put an end to the phenomenon of forced marriages, kidnappings and religious conversion of underage girls: this is the appeal released by the Catholic Bishops' Conference of Pakistan on the occasion of the International Day of the girl, declared by the UN, which is celebrated today, October 11. In a statement sent to Fides, the National Commission for "Justice and Peace" (NCJP), an organ of the Conference of Catholic Bishops of Pakistan, calls on the authorities to take concrete legislative measures to end forced marriages in for the purposes of forced conversion. The text recalls that every year in Pakistan, more than 1,000 young Hindu and Christian girls, that is to say belonging to minority religious communities, are victims of kidnappings and forced conversions through forced marriages. The Christian community challenges this violence, the abuse of personal freedom and freedom of religion against adolescent girls. The statement criticizes the government's resistance to passing such legislation. In this note, Bishop Samson Shukardin, President of the Commission, Fr. Emmanuel Yousaf (Mani), National Director and Naeem Yousaf Gill, Executive Director, urge the federal government to adopt "a logical and legal position in accordance with its international obligations and constitutional provisions for the protection of minority rights". "Girls who are victims of this violence face the trauma of separation from their parents and suffer physical, mental and emotional abuse. The girls' parents are threatened and urged to keep silent. The crime of forced conversion involves multiple violations of human rights, such as freedom of religion and fundamental human rights", notes the statement from the Commission.
The action of the Catholic Bishops joins that of various international organizations, including the NGO "ADF International" (Alliance Defending Freedom), which published an open letter asking that young girls from religious minorities be protected from the horrors of kidnappings and forced marriage. The open letter calls on the government of Pakistan to set up special help lines to report cases, to return minors to their parents, and to ensure that the police and the judiciary better protect girls belonging to religious minorities. "No one should be persecuted for their faith. In Pakistan, young Christian girls are kidnapped and converted through forced marriage. Maira's case is just one glaring example. We ask you to support the #EndForcedMarriage campaign and to sign the letter in order to exert international pressure on the Pakistani authorities", notes Tehmina Arora of ADF International.
The organization recalls, among other things, the story of 14-year-old Maira, who fled from forced marriage. Maira, kidnapped and forced to marry and convert to Islam, escaped from her kidnapper and is now living in hiding, while her lawyers have asked the court to cancel her marriage certificate.
On December 19, 2011, the United Nations General Assembly adopted Resolution 66/170 to declare October 11 International dau of the Girl, to recognize the rights of girls and the unique challenges they face around the world. (PA) (Agenzia Fides, 11/10/2021)

AMERICA/COLOMBIA - The release of Sister Gloria, a moment of joy long awaited by the Church in Colombia

AFRICA/CAMEROON - Spiral of violence in the English-speaking regions, the Bishops: "Life does not seem to have any more value"