AFRICA/TOGO - Churches closed until mid-October, but missionaries do not stop solidarity 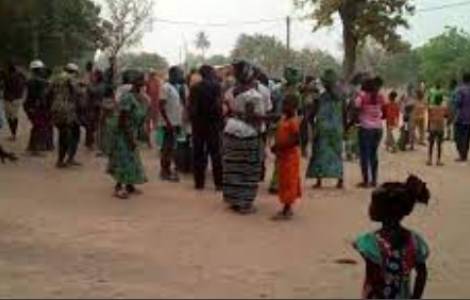 2022-01-15
"Equalization and the health of the priest": General Assembly of the Fraternity of Diocesan Priests of Togo

2021-12-22
The true meaning of Christmas in caring for others: the missionaries never stop

Kolowaré (Agenzia Fides) - The episcopal conference of Togo has asked in this month of the Rosary to light a candle on October 7, the day of Our Lady of the Rosary, in front of the closed doors of all parish churches. Despite the imposition of the closure of churches in the African Country, the commitment of the missionaries does not stop. "Here I am again in Kolowaré. I returned on September 16 after my usual annual stay in Genoa at the Provincial House of the Italian Society for African Missions (SMA)". Father Silvano Galli, priest of the Society for African Missions, missionary in Togo, told Fides about his return to the mission land that has welcomed him for 17 years, after 22 years in Ivory Coast. "I left from Genoa with Fr. Ceferino Cainelli, Provincial of the Italian province of SMA, we arrived in Lomé half an hour earlier than expected - he wrote. After all the checks, I arrived at customs. The baggage scanner was broken, and they opened my suitcases. I approached the chief of the customs officers, greeted with a convinced Salam Aleikoum, then two words in kotokoli, I explained that I am priest in Kolowaré and, with a smile, they let me pass. The driver Bassarou from Kolowaré is waiting for me to go to the Maison Régionale. " The missionary explains that this 'regional house', in the neighborhood of Beh in Lomè, is the point of reference for all the SMA fathers working in Togo.
"It will become a center to welcome the propaedeutic, with young people who wish to enter our community, in which I will also be present from January when I leave Kolowaré".
"The next day we left and stopped in Amakape where they offered us several packs of medicines for the dispensary in Sokodé - continued Fr. Silvano. At the entrance to Sokodé, a policeman asked us what was in the packages. 'Medicines for the Dispensary' in Kolowaré, I replied. The policeman lights up: 'But I went to school in Kolowaré, I lived behind the old church'. Once we arrived at the mission, we unloaded the medicines in front of the nuns' warehouse as the churches here are closed until mid-October. The next day, early in the morning, a few visits followed one another: a group of boys arrived with their coaches, Charles, with a chicken, Jean with vegetables from the garden, Celine with a pitcher of local beer, and then the group of children who came with baskets of manure for the vegetable garden. They learned of my arrival, and here they are! These little missionaries made me feel at home again", concluded Fr. Galli. (SG/AP) (Agenzia Fides, 4/2/2021)