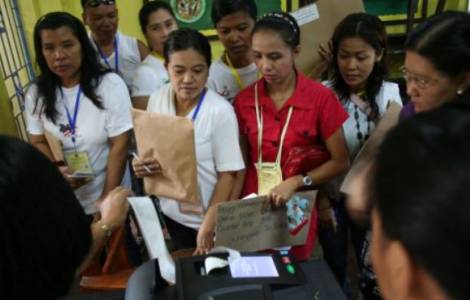 2021-11-06
The poorest Filipinos are "non-citizens": undocumented and without identity

2021-10-09
The Bishops: the Nobel Peace Prize awarded to journalist Maria Ressa, a sign of hope for the future

Manila (Agenzia Fides) - "Citizens are called upon to exercise their right to vote responsibly while the country is still marked by the pandemic": this is the appeal launched by several Catholic leaders in the Philippines, with a view to the general elections on May 9, 2022, in which the President, Parliament and many local administrators will be elected. Meanwhile, some politicians in the country have already considered postponing the election if the pandemic is not resolved. Despite the pandemic, next year's elections are a crucial moment in the country's social and political life that deserves the greatest attention, emphasizes Bishop Pablo Virgilio David von Kalookan, elected chairman of the Philippine Bishops' Conference (he will take office in December). It is necessary to be very cautious so that "the current health crisis is not used by some sectors to hinder the elections", he noted. "It must be ensured that the elections are held and that preparations are carried out in accordance with the law and health protocols", he said, calling on the authorities responsible to ensure that the elections run smoothly and that the integrity of the ballot papers is guaranteed. The aim, according to Archbishop David, is for "these elections to be transparent, honest, accurate, credible and peaceful". For this to happen - he said - the full participation of citizens is absolutely necessary". The Catholic faithful should get involved in political activities and issues, since "politics is the highest form of charity" and "political commitment is an integral part of being responsible citizens". "It is part of our life as citizens to respect and care for the common good of our country", said the prelate. The Bishop of Kidapawan, Mgr. Jose Collin Bagaforo, National Director of Caritas Philippines, addressed the issue of elections during the launch of "Halalang Marangal 2022", a coalition of over 20 organizations, Catholic and non-Catholic, who have decided to work together to guarantee "a responsible and transparent vote". In addition to Caritas, the Bishops' Commission for Indigenous Peoples, the Episcopal Commission for Young People, the Association of Major Superiors in the Philippines (AMRSP) are part of the coalition, among other bodies; the Catholic Educational Association of the Philippines; Radio Veritas 846. The network intends to carry out a process of "discernment and common action, for the good of the country and the sacredness of the vote", said Fr. Antonio Labiao, Executive Secretary. "Our political choice reflects our values," said Bishop Bagaforo when presenting the new initiative. "The vote - he explained - reveals who I am. The votes cast by people are a reflection of this. Our vote is an expression and affirmation of our human dignity, a fundamental principle of Catholic social doctrine", he added. "It is a gift from God to people and the way we use it is our gift to our country. It is the fulfillment of one's own responsibility to participate in the social and political life of our country and to influence it". As the nation is shaken by numerous problems and challenges, including the pandemic, "Filipino citizens deserve a leader with a servant's heart", he said. But, to be "a real leader at the service of the people - he continued – one must have competence, experience, compassion, kindness, passion and perseverance". "An effective leader provides guidance and inspires God's family to work tirelessly to improve the living conditions of all Filipinos, with a focus on the marginalized and excluded", concluded Bagaforo. Agnes Brazal, a professor at De La Salle University in Manila and the St. Vincent School of Theology in the capital, noted that "using one's right to vote wisely means participating personally in promoting the Kingdom of God". Because of the pandemic, many Filipinos have concerns about registering with the Electoral Commission. The registration of voters, which was supposed to end on September 30th, was therefore extended until October 31st to enable all citizens to register on the electoral roll so that they can exercise their right to vote. According to Brazal, there is still some fear of contracting the lethal virus: "If it hadn't been for the pandemic, there would have been more registrations". In view of the political elections, scheduled for May 9, 2022, the Electoral Commission is expected to publish the list of official candidates, including those running for President, Vice President, the seats of the 12 senators and the 308 members of the House of Representatives. In addition, there are 81 governors and deputy governors, 780 seats in the provincial councils, 1,634 mayors and deputy mayors of municipalities, 13,546 seats in the municipal councils. According to the 1987 Philippine Constitution, general elections take place every six years, on the second Monday in May. In the Philippines, where 48% of the nearly 110 million inhabitants are under 25 years old, about 80% of the population profess the Catholic religion. (SD-PA) (Agenzia Fides, 29/9/2021)

AMERICA/VENEZUELA - Bishops for the elections: "We must not remain in quarrel and conflict"

AMERICA/CHILE - The Bishops: participation in the synodal journey and in the electoral process promotes the common good, equality and peace

AMERICA/COSTARICA - Education, a privileged field for personal and family growth, for a culture of friendship and solidarity

AMERICA/BOLIVIA - The Council of the laity: our challenge is to have a leading role in building a culture of peace

AMERICA/COLOMBIA - Millions of people in poverty, indifference would be even worse in the face of this situation