AMERICA/CANADA - Prayer is the foundation of all effective mission animation, not only for Mission Sunday, but all year round 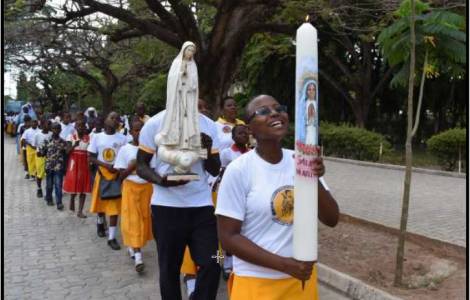 2022-07-26
"One cannot proclaim God in a way contrary to God himself". Pope Francis asks native peoples for forgiveness

2022-05-16
The Bishops: "As we prepare to welcome the Holy Father, we continue the journey of healing and reconciliation"

Mississauga (Agenzia Fides) - After a two-year break due to restrictions due to the Covid-19 pandemic, the National Director, Fr. Alex Osei, CSSp, and the Diocesan Directors and their collaborators of the Pontifical Mission Societies in Anglophone Canada gathered for their annual reunion from the 7th to the 9th of September, 2021.
The meeting that included the National Director and a number of Diocesan Directors was held at Queen of Apostles Renewal Centre in Mississauga.
About half of those who were invited did not attend because of pandemic concerns.
Father Tadeusz Nowak, OMI, Secretary General of the Pontifical Society for the Propagation of the Faith (POPF) was invited to animate the meeting, who spoke about the charism of this Missionary Society and stressed that, together with the other three Pontifical Mission Societies, the PMS form a global network of prayer, formation and charity for the Holy Father in his concern for the proclamation of the Gospel in mission territories and for the young Churches that are founded as a result.
Father Nowak emphasized prayer as the foundation of all effective mission animation, and the participants were encouraged to promote authentic prayer, in its many forms, in the areas of their responsibilities, not only to prepare prayer animation for Mission Sunday, but to encourage prayer for the missions in local Christian communities throughout the year.
Emphasis was placed on the fact that the Pontifical Mission Societies are not charitable organizations that fund "Churches in economic difficulty", but rather they are a global network or family of mutual support, through prayer and the sharing of material goods. The responsibility of the local Church for its development and for the projects was also stressed: the PMS in fact "support", but do not "fund" local Churches, which in turn participate in the network through their prayers and offerings.
The participants were given a copy of the Holy Father Francis' Message to the PMS, prepared for the 2020 General Assembly, encouraging them to read, reflect and share the Pope's recommendations with others. The newly reformed PMS website was also presented with an overview of its contents. During the meeting, in addition to a large space for dialogue, a special time was also reserved for prayer. The celebration of the Eucharist presided over by the National Director of the PMS of Anglophone Canada, Fr. Alex Osei, CSSp, opened the meeting on the evening of September 7. Father Tadeusz Nowak, OMI, presided at Mass on the morning of September 8, while the Auxiliary Bishop of Toronto, Msgr. Vincent Nguyễn Mạnh Hiếu, joined the assembly and presided at Mass on Thursday morning, September 9. The diocesan Director of the PMS of St. Catherine presided the closing Mass. In these intense days of work, prayer and sharing, the participants were encouraged to renew their commitment to further the work of the PMS. (SL) (Agenzia Fides, 28/9/2021)