AMERICA/COSTA RICA - The Bishops for the elections: "exercise the duty and the right to vote, which is an achievement of our democracy" 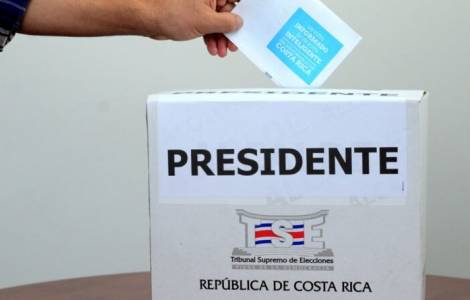 2021-11-10
Education, a privileged field for personal and family growth, for a culture of friendship and solidarity

2021-09-28
The Bishops for the elections: "exercise the duty and the right to vote, which is an achievement of our democracy"

2021-05-07
The Bishops on the "morning after pill": enough with policies contrary to the values of the nation

2021-02-23
"Looking to history while thanking God, looking to the future confident in his power": one hundred years of the Ecclesiastical Province

San José (Agenzia Fides) - "In a context of concern, anguish and pain that the Covid-19 pandemic has brought to so many families in our country and which has exacerbated a number of problems in our society, we appeal to patriotism and responsibility for the new democratic electoral process that is about to begin": this is what the Bishops of Costa Rica write in a message published in view of the elections of February 2022, when citizens will be called to elect the President, Vice-president and members of the Legislative Assembly. In the text, which bears the date of September 27, the Bishops address themselves in a particular way to the political parties, which "have the serious responsibility of proposing the people who will be chosen to serve the country", and offer some reflections based on evangelical discernment and on the Magisterium of Pope Francis, inviting voters to inform themselves "in a serious and conscious way to exercise the duty and the right to vote, which is a conquest of our democracy". The detailed document of the Bishops, sent to Fides, is entitled "Recognize, interpret and elect", inspired by Evangelii Gaudium (51), and is therefore divided into three parts. The first part proposes a series of considerations on the reality of the country: the weakening in recent years of the rule of law, in solidarity and inclusion; poor results of the dialogue to resolve the national crisis in the health, educational, social and economic fields; general distrust of institutions; growth of corruption, violence, drug trafficking, organized crime; the fragility of the system that should guarantee social well-being, highlighted by the pandemic; increase in unemployment, the cost of living and basic products and foreign debt. Faced with this reality, the Bishops invite us to look with hope at the new electoral process from which will emerge, they hope, people who will guide the country in the period 2022-2026, and who will have the capacity to "rebuild and consolidate the foundations of the nation, in search of the common good and the integral development of people". In the second part, "Interpret", the Bishops recall Pope Francis' thought on the concept of politics (EG 205), noting that this must be the result of the efforts of all "to assume personal and community responsibility in order to respond to current challenges", which is why the apathy towards politics recorded in recent months among the citizens of Costa Rica is worrying. The Bishops recall that they have repeatedly emphasized that solidarity is the way forward for the bicentenary of the nation's independence, otherwise the future will bring more and more poverty and inequality. "Reducing the educational gap, supporting productive sectors, facilitating development paths for entrepreneurs, are just some of the areas in which we need proposals for urgent, concrete and practicable solutions". An invitation to pray for all those involved in the electoral process opens the third part of the message, entitled "Elect". "In a particular way - they write - we invite citizens to participate in the next civic-electoral process, to choose, in a conscious and responsible manner, at all levels of popular elections, the leaders most capable of supporting the full recovery of the country, in social, health, economic and even moral fields; and to do so in a thoughtful way, after a deep analysis and reflection, without falling into the trap of prefabricated polarizations, fictitious or, many times, of a purely ideological nature". After an appeal to the media and to those who use social networks to deepen political issues "not only as communicators, but also as educators of the electorate", the Bishops recall that "we have an electoral system to take care of, to protect and enhance, and this is achieved by participating and voting in the next elections", with the hope that "this electoral process is an authentic expression of responsibility, democracy and civic spirit, in which respect and order prevail". (SL) (Agenzia Fides, 28/9/2021)

AMERICA/URUGUAY - After the interruption due to the pandemic, thousands of pilgrims return to the Shrine of the "Our Lady of the Thirty-Three"

AMERICA/COLOMBIA - Millions of people in poverty, indifference would be even worse in the face of this situation

AMERICA/COLOMBIA - Good politics, selfless service and social dialogue will bring forth the fruits of peace and justice

AMERICA - The Bishops of Central America: "let's leave our churches and set out to announce the Good News of the Gospel"