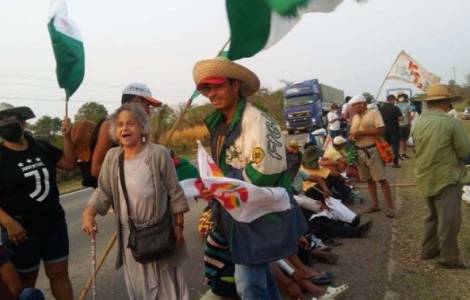 2022-08-05
Month of the Catechist in Santa Cruz: "Walking together in Communion, Participation and Mission"

2022-07-08
Diocesan clergy: "May the synodal journey be a source of profound renewal for the Church and for all of society"

2022-03-11
The Laity of La Paz: the State guarantees respect for the Constitution and the laws

Santa Cruz (Agenzia Fides) - "It is necessary to change our mentality and adopt an ecological spirituality, to stop the irrational exploitation of non-renewable natural resources, wild deforestation, forest fires, even of reserves and national parks. But it is also urgent to take on an austere lifestyle, with concrete and daily gestures, avoiding waste of water, throwing garbage on the street and many other acts that damage nature", said the Archbishop of Santa Cruz, Mgr. Sergio Gualberti in yesterday's homily, Sunday, September 26, in the Cathedral.
The Prelate continued: "We must ask the Lord for forgiveness for the sins against creation and that, in his great love, help us to carry forward with all our strength this common, vital and inalienable commitment". He then added: "It is necessary to intervene to heal the serious wounds of nature. Our Country is also seriously affected by this problem, as the indigenous brothers and sisters who are at the gates of the Cathedral and those who are still on the way testify".
In fact, while the Archbishop was celebrating Mass in the Cathedral, there was a large group of Bolivians, members of the native peoples in the churchyard, who had marched for 15 days to reach the city of Santa Cruz.
Another group had left earlier, on August 24, from the city of Trinidad (Beni). This Great Indigenous March which convenes the East, the Chaco and the Bolivian Amazon, aims to demonstrate in front of the institutions in order to claim the protection of their territory, because these peoples suffer a constant violation of their rights despite the existence of laws that protect them. On August 15, 31 years ago, the famous "Great March" took place, a historical mobilization of the native peoples of Bolivia, who managed to have their claims written in the Bolivian Constitution.
During these 31 years, the Catholic Church has welcomed and supported indigenous people through families, communities and parishes, offering them the support they need to continue living. Native peoples are also the main victims of the destruction of nature, also for this reason the Church calls to Take Care of the earth. However, in the last 10 years there have been fires in 58 indigenous territories (see Fides, 7/8/2021). As the Church has always affirmed, the protection of the land in Bolivia is a question that has a spiritual basis (see Fides, 31/8/2020).
At the end of the homily, Mgr. Gualberti recalled the celebration of the World Day of Migrants and Refugees: "Migrants and refugees are victims of human greed and ambition, wars and natural disasters force entire peoples to migrate to save their lives", said the Archbishop. "This is everyone's problem, including us. In our world, in fact, more and more refugees and migrants are suffering the tragedy of having to leave their land, their home and their jobs in search of subsistence", he concluded. (CE) (Agenzia Fides, 27/9/2021)

ASIA/CAMBODIA - Catholics and Buddhists celebrate the "Time of Creation" together