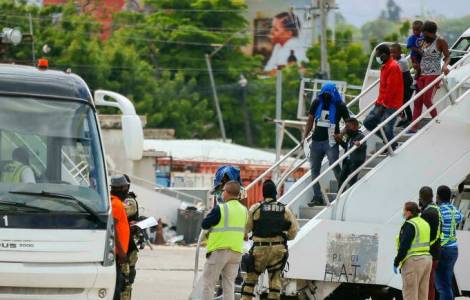 2021-09-17
Bishops on proposals regarding immigration: "We cannot persist in relegating these members of our society to the margins"

2021-09-09
Against polarization and division: empower individuals, families, and communities to be bridgebuilders across perspectives

Washington (Agenzia Fides) - Scenes of anger and despair have broken out at Haiti's main airport, in Port-au-Prince, upon the arrival of Haitian migrants who, after spending thousands of dollars on troubled journeys from the Caribbean nation through South America, hoping for a better life in the United States, were sent home after being held in a squalid Texas border camp, stripped of everything.
US President Joe Biden has faced increasing pressure to stop the expulsion policy. Filippo Grandi, at the Head of the UN refugee agency, said US expulsions in such an unstable situation could violate international law and could constitute an act of refoulement, or expose people seeking refuge to life-threatening situations. Also yesterday, Tuesday, September 21, US Senate Majority Leader Chuck Schumer called Biden, saying he "defies common sense" to expel migrants to Haiti and criticized the tactics used by border guards to control the crowd in the camp.
The scenes broadcast by the media where US border agents are seen on horseback, violently intimidating migrants, have aroused uproar and indignation around the world. US Department of Homeland Security Secretary Alejandro Mayorkas said he was appalled by the images of the mistreatment, echoing increasingly pressing criticism. US Vice President Kamala Harris said the situation is complex and that the US must "do much more" to support the basic needs of the people in Haiti, who would certainly prefer to stay at home. The camp's population peaked at 14,000 over the weekend, according to the UN Refugee Agency. Fearing expulsions, part of the population who had camped in the makeshift camp under the bridge across the Rio Grande, from the Texan city of Del Rio to Ciudad Acuna, Mexico, moved to a new camp on the Mexican side of the river. Unfortunately, the tension is also rising beyond the border, because the Mexican authorities have organized flights and buses to the southern states, after starting to collect Haitians in refugee camps in Ciudad Acuna, just beyond the border with Del Rio. The move appears to be aimed at reducing the concentration around the camps, which is high. In the new camp on the Mexican side, which has grown considerably, migrants are helped by various bodies, including the Red Cross and Doctors Without Borders, as well as the United Nations Agency for Migrants, and also by the residents of Ciudad Acuna, who brought food for the refugees. All this happens during the National Migration Week 2021, organized by the United States Bishops' Conference (USCCB). The initiative, which prepares the World Day of Migrants and Refugees on September 26, has as its theme "Towards an ever wider 'We', taken from the Encyclical Fratelli Tutti by Pope Francis. The note sent to Fides by the US Bishops underlines the message for the Day, which calls us to ensure that "we no longer think in terms of 'them' and 'those', but only 'us'" (Fratelli Tutti, n. 35 ) and this universal "us" must become a reality first of all within the Church which is called to cultivate communion in diversity.
The annual National Migration Week aims to emphasize the importance of the migration issue for the Catholic Church in the United States. "The history of migration is a history of compassion, acceptance and unity", said Mgr. Mario E. Dorsonville, Auxiliary Bishop of Washington and president of the Episcopal Commission on Migration. "It is about opening our hearts to others and, in this critical moment, we must not look far to see its practical application or find those who need to migrate. The Holy Father calls us to embrace and express the catholicity of the Church, its universality, "according to the will and grace of the Lord who promised to be with us always, until the end of time". The Catholics of the USA must be united to respond to his call and be particularly aware of it during this week". (CE) (Agenzia Fides, 22/9/2021)

AMERICA/BOLIVIA - Caritas Bolivia will continue to help migrants at the borders with Peru, Chile and Argentina in 2022

AMERICA/MEXICO - Red Clamor: "We do not want migrants, victims of various forms of violence, to continue to increase in the world"