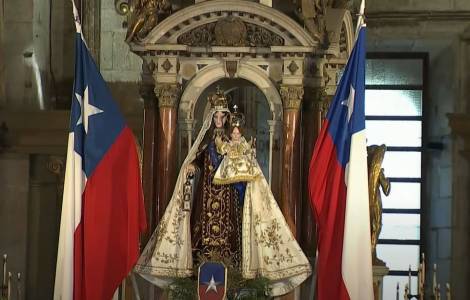 2021-10-25
Violence and polarization on the rise in view of the elections: the Bishops call for dialogue and responsibility

2021-10-21
Bishopric of Talca ransacked and burned down: "violence does not solve Chile's problems"

2021-09-27
Violence against migrants: "We cannot allow a new epidemic, this time of hatred, racism and xenophobia"

2021-09-21
In times of social change, Catholic radio stations must strengthen their commitment to building a better community, based on the Gospel

2021-09-20
The values that should be present in the new Constitution: Cardinal Aós at the Te Deum

Santiago (Agenzia Fides) - The ecumenical "Te Deum" of thanksgiving for the independence of Chile was celebrated in the Metropolitan Cathedral, as usual in the presence of the highest authorities of the Country, led by the President of the Republic, Sebastián Piñera, on Saturday, September 18.
In his homily, Cardinal Celestino Aós, Archbishop of Santiago, said that when there is something wrong in our relationship with reality, it is necessary to return to the foundations of our own culture: "The importance of ecology is today beyond dispute. We must listen to the language of nature and respond to it coherently". He recalled that there is also an ecology of man, "which must be respected and which he cannot manipulate as he pleases", because "man does not create himself. He is spirit and will, but also nature, and his will is right when he respects nature, listens to it, and when he accepts himself for what he is, and admits that he did not create himself. Thus, and only in this way, true human freedom is fulfilled".
The Archbishop took the opportunity to refer, on behalf of the Church, to what the new Constitution should contain, mainly on matters of value, and thanked "the women and men who work in the Constituent Convention, preparing and writing a new Constitution who will guide and govern us"(see Fides, 3/7/2021).
"We thank all those who try to respect and protect non-negotiable values: respect and defense of human life from its conception to its natural end, the family founded on marriage between a man and a woman, the freedom of parents to choose the model and the institution of the education of children, the promotion of the common good in all its forms and the subsidiarity of the State, which respects the autonomy of organizations and collaborates with them", said the Cardinal. Cardinal Celestino Aós thanked the Lord for all those who "with good will, commit and work to find relief and a solution to the problem of indigenous peoples both in Araucanía, which suffers from violence, and of other peoples".
He also thanked those who have at heart the welcome, protection, promotion and integration of immigrants; women and those who accompany them, "and who promote their respect as persons and the promotion of their rights". This Te Deum was the last of the second government of President Sebastián Piñera.
At the beginning of the celebration, Cardinal Aós remembered the victims of the coronavirus and prayed for the people who died as a result of this pandemic. (CE) (Agenzia Fides, 20/9/2021)

AMERICA/NICARAGUA - Managua's "Justice and Peace" denounces the "manipulation, politicization and management" of the pandemic