EUROPE/POLAND - The Pontifical Mission Societies prepare the 2022 Jubilees: Synod of Children, Pilgrimage of the Living Rosary, Encounter of young people 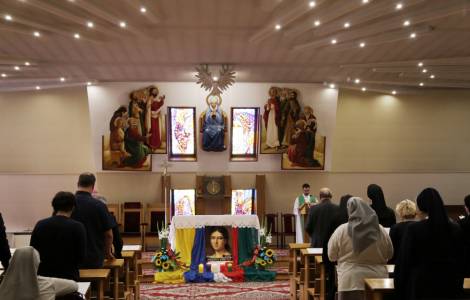 2022-09-17
Father Bovio warns of the onset of winter in Ukraine: “Requests for help are increasing”

2022-06-24
Camillians: monitoring of the assistance project for Ukrainian refugees continues

Czestochowa (Agenzia Fides) - The preparation of the important missionary Jubilees planned for 2022 was the main theme of the autumn meeting of the Pontifical Mission Societies (PMS) and other missionary realities in Poland.
The meeting, held on September, 15 and 16 at the Seminary of Czestochowa, was attended by 84 people including diocesan directors of the PMS, missionary representatives of female and male religious congregations, lay animators. In fact, 2022 will celebrate the 400th anniversary of the foundation of the Congregation for the Evangelization of Peoples, the 200th anniversary of the Pontifical Society for the Propagation of the Faith, the 100th anniversary of the recognition of "Pontifical" and the 150th anniversary of the birth of blessed Father Paolo Manna, founder of the Pontifical Missionary Union.
According to information sent to Fides by Fr. Luca Bovio IMC, National Secretary of the Pontifical Missionary Union, the special guest of the meeting was Father Tadeusz Nowak, OMI, Secretary General of the Pontifical Society for the Propagation of the Faith (POPF). The meeting was opened by the new National Director of the PMS, Fr. Maciej Bedziński, who invited everyone to reflect on the missionary commitment of the Church during and after the pandemic, and presented the theme of preparation for the missionary Jubilees. The president of the Commission for the missions of the Polish Bishops' Conference, Mgr.Jerzy Mazur, at the end of his mandate, summarized the ten years of his service, underlining the missionary initiatives carried out, and thanked all those who work in missionary animation for the fruitful collaboration, encouraging them to develop it also with the new President of the Commission, who will be elected in November.
After the interventions of the representatives of the institutions linked to the Episcopal Commission for the Missions, who presented their activities, the first day of the meeting ended with the Holy Mass, presided over by Monsignor Mazur, who invited us to pray tirelessly for the missions and the missionaries, asking for the intercession of Mary, the first missionary. In the evening, during the prayer at the foot of the image of Our Lady in the Shrine of Jasna Gora, Fr. Maciej Bedziński thanked for the Polish missionary vocations and entrusted the ongoing missionary activities and all the missionaries to Our Lady, asking for a missionary spirit for all the church.
On the second day of the meeting, the National Secretaries of the four Pontifical Mission Societies presented their reports and plans for 2021/2022. The National Secretary of the Pontifical Society of Missionary Childhood (POSI), Sister Monika Juszka RMI, illustrated the preparations for the Synod of Children: "As part of the celebration of the Jubilees of the Pontifical Mission Societies in 2022, a special event will be the Synod Missionary of Children, scheduled for September 17, 2022 at the headquarters of Cardinal S. Wyszyński University in Warsaw. The special guests of the Synod will be Archbishop Salvatore Pennacchio, Apostolic Nuncio in Poland, and Sr. Roberta Tremarelli, AMSS, General Secretary of POSI".
The National Secretary of the Pontifical Missionary Union, Fr. Luca Bovio IMC, announced the resumption of missionary meetings in seminaries, moreover for the 400th anniversary of the Congregation for the Evangelization of Peoples he proposed some formative material with reflections on missionary prayer each month. Finally, he invited to the December Missionary Session and to the prayer vigil in Jasna Góra, which will focus on the slogan "Sent in the peace of Christ". The new National Secretary of the Pontifical Society for the Propagation of the Faith and of the Pontifical Society of St. Peter the Apostle, Fr. Michal Kacprzyk, presented the proposals related to the celebration of the Jubilees of these two Societies: the national pilgrimage of the prayer groups of the Living Rosary in Czestochova and the National Youth Meeting in Lednica.
After the reports, Secretary General of POPF, Fr. Tadeusz Nowak, OMI took the floor on the theme "Development prospects and challenges for POPF in the context of the 200th anniversary of the foundation of the Opera". The speaker underlined the role and task of the Living Rosary prayer groups in the missionary activity of the Church.
"This form of community prayer, just like in the days of its creator, the servant of God Paulina Jaricot, bears inestimable fruits in the development and strengthening of the Church in mission countries. We are close to the elevation to the altars of this servant of God", said Father Nowak.
He also noted that the Pontifical Mission Societies, despite their central nature, papal, are rooted in the local Church, because from there the young ecclesial communities of the different continents are supported. At the end of his speech, on behalf of the Congregation for the Evangelization of Peoples, he thanked the Pontifical Mission Societies in Poland for their zealous and continuous help to the missionary Church, even during the pandemic. Fr. Nowak then presided over the Mass at the end of the meeting, in which he underlined the value and the need to constantly awaken the missionary spirit in the Church, following the example of Paulina Jaricot, also asking for prayers in view of her beatification. (LB/SL) (Agenzia Fides, 18/9/2021)