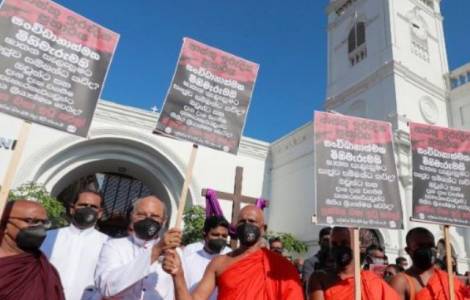 Colombo (Agenzia Fides) - "We reiterate the request for a transparent investigation, which ascertains instigators and responsibility for the Easter attacks. The Church and the entire nation, shocked by terrorism, have the right to know the truth, have the right to receive justice. Out of respect for the victims there can be no impunity and one must go deeper, in such a serious matter, for the common good of the nation, also because, according to the presidential commission that dealt with the case, there are elements and indications that see contacts and disturbing links between sectors of the military and intelligence apparatuses with terrorist groups": said to Fides Cardinal Malcolm Ranjith, Archbishop of Colombo,, who today returned to express himself publicly on the story that is an open wound for the Sri Lankan people: the Suicide attacks on churches and other places on Easter Sunday in 2019, which killed 279 people, including 37 foreign nationals. After those serious episodes, which still represent trauma for thousands of people, for families and communities, the Catholic Bishops immediately asked politics to ensure a transparent and neutral investigation, which has not yet started. "Newly-elected President Gotabaya Rajapaksa, who had promised his commitment to truth and justice in the electoral campaign - notes Cardinal Ranjith - did not keep his promises after the election. He told us that the indications received from the ad hoc presidential Commission are inadmissible. In fact, the state is abdicating to obtain justice, betraying the expectations of citizenship", he explains to Fides. In recent days, the Catholic Church has invited the faithful and all citizens to hoist a black flag, on August 21, in front of homes, institutions, shops, as a symbol of silent protest. Now the public campaign with the motto of "truth and justice" continues, on the eve of a trip by Prime Minister Mahinda Rajapaksa, brother of President Gotabaya, who will speak at an international symposium at the University of Bologna, in Italy, on the occasion of the 8th edition of the "G20 Interfaith Forum" held from September, 12 to 14.
In a press conference held today in Colombo, the Cardinal reiterated that the points raised by the report of the Presidential Commission "should be implemented if they suffer from a thorough and adequate investigation, without hesitation". The Catholic Church in Sri Lanka says it fears that "the government does not want to find out the truth about the attack, it wants to cover up everything and wash its hands", despising the victims, the innocent killed and the whole nation. According to that report, elements have emerged that denote contacts and complicity between military and intelligence sectors with the terrorist groups materially perpetrators of the attacks, "in a strategy of tension that intended to generate chaos and civil strife, in order to assume power", the Cardinal warned.
Faced with an extremely serious institutional context, the Archbishop of Colombo condemns the "culture of impunity" and the possible contiguity of state apparatuses and terrorist groups which, if not dismantled, could generate "new attacks such as the one that took place on Easter Sunday, at any time". The Sri Lankan Attorney General has accused 25 suspects, members of radical Islamic groups, accused of involvement in suicide attacks on charges of conspiracy, preparation and abetting, collection of explosives and weapons, murder and attempted murder. This is not enough for the Church, as it is necessary to go back to the instigators of the massacres: "There is a suspicion that the government in office is the invisible hand behind the attacks", explained Fr. Cyril Gamini Fernando, hoping that "the International Criminal Court can deal with the case". (PA) (Agenzia Fides, 8/9/2021)

AFRICA/D.R. CONGO - Tensions in Goma due to the protests of the population demanding for more safety and the blue helmets