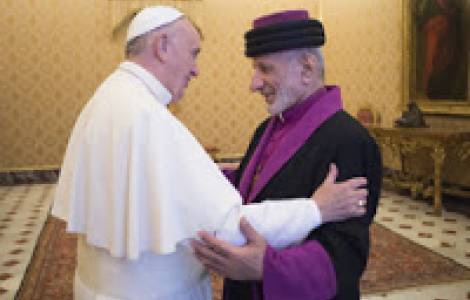 2022-06-06
Chaldean Patriarch Sako: Iraqi Christians are true patriots, they are not a "minority" of "infidels"

Erbil (Agenzia Fides) - The Synodal Assembly of the Assyrian Church of the East opened on Monday, September 6, 2021, called to elect a new Patriarch. The elective synod takes place at the Assyrian church of St. John the Baptist in Ankawa, a suburb of Erbil inhabited mainly by Christians. The meeting began with a speech by outgoing Patriarch Gewargis III Sliwa, who had already resigned from the patriarchal office for health reasons in February 2020. After his speech, the 15 Assyrian Bishops present began the sessions behind closed doors to elect the new Patriarch. Mar Gewargis III Sliwa had announced his retirement from the patriarchal office with a letter sent to all Assyrian bishops on February 3, 2020 (see Fides, 21/2/2020). In that letter, Mar Gewargis reported that his health condition was improving, following the serious health problems that affected him in December 2019 during his stay in Germany. At the same time, the worsening of his physical condition - the Patriarch added in his letter - had led him to reflect deeply on his inability to adequately perform the functions related to the "sublime task" entrusted to him. For this reason, in complete freedom and after deep reflection and prayer, Patriarch Gewargis had decided to renounce the patriarchal function and the duties connected to it. The elective Synod to elect the new Patriarch of the Assyrian Church of the East had been convened in first instance in Erbil from April, 22 to 27, 2020, with a statement sent to all the Bishops by Mar Awa Royel, Assyrian Bishop of California and Secretary General of the Assyrian Holy Synod. Then, with the outbreak of the pandemic, the various waves of infections caused the postponement of the electoral procedures aimed at giving a new Patriarch to the Assyrian Church of the East.
Gewargis Sliwa was born on November 23, 1941 in Habbaniya, Iraq. He completed his studies first in Baghdad and then in the USA. He was ordained a priest in June 1980 and bacame Metropolitan Archbishop for Iraq in 1981. The Synod of the Assyrian Church of the East chose him as the new Patriarch on September 16, 2015 (see Fides, 21/9/2015). As Metropolitan of Iraq, Jordan and Russia, Gewargis was the only candidate for patriarchal office still residing in Iraqi territory. The Assyrian Patriarchal See, following the exile of Patriarch Mar Eshai Shimun XXIII, had left the Middle East in 1933 and since 1940 had been established in Chicago, in the United States. During the years of the patriarchal office of Mar Gewargis, the patriarchal seat of the Assyrian Church of the East returned to the Middle East and was located in Erbil, the capital of Iraqi Kurdistan. Mar Gewargis III had succeeded Patriarch Mar Dinkha IV, who died in March 2015 in the United States, after a patriarchal mandate that lasted 39 years. The Assyrian Church of the East has never had any direct theological and dogmatic conflicts with the Bishop of Rome. The theological dialogue between the Assyrian Church and the Catholic Church officially began in 1984, and led to the 1994 Common Christological Declaration (CCD), which confessed the faith in Christ shared between Catholics and Assyrians. The theology and spirituality of the Assyrian Church strongly emphasize the human nature of Christ.
During his first meeting with Pope Francis (photo), which took place in Rome in November 2016, Mar Gewargis III had suggested that the Bishop of Rome convene a meeting of the Patriarchs and Heads of the Eastern Churches to "discuss the situation in the Middle East, pray together and seek solutions to the problems". The Assyrian Patriarch's suggestion was then effectively fulfilled with the ecumenical meeting on the Middle East convened by Pope Francis in Bari on July 7, 2018. (GV) (Agenzia Fides, 7/9/2021)

AFRICA/CAMEROON - A Baptist Pastor: "religious ommunities are more united than ever"

EUROPE/ITALY - Armenian Catholic bishops summoned to Rome to elect the Patriarch. Cardinal Sandri: may the Spirit of Christ help to overcome the logic of alignment

EUROPE/RUSSIA - Ecumenical dialogue and theology: "responsibility towards oneself and towards society"