AMERICA/COLOMBIA - The imprisonment of Sister Gloria Cecilia Narvaez: testimony of the evangelizing mission 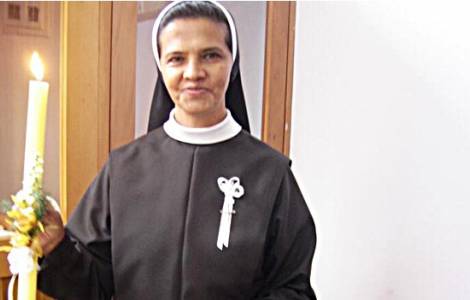 2021-10-11
The release of Sister Gloria, a moment of joy long awaited by the Church in Colombia

Cartagena (Agenzia Fides) - "Like Jesus, Sister Gloria was dedicating her life to fighting disease, injustice and marginalization. Her missionary testimony, in contexts such as Mali, caused her misunderstandings up to her imprisonment". This is what Father Rafael Castillo Torres, Colombian priest of the Archdiocese of Cartagena and director of the Programa de Desarrollo y Paz del Canal del Dique, writes in remembering Sister Gloria Cecilia Narvaez in the hands of the kidnappers since February 7, 2017 (see Fides, 8/2/2017). On July 1st, 2017, the Group for the Support of Islam and Muslims (GSIM), the branch of Al-Qaida based in Mali, Africa, had claimed responsibility for the kidnapping of the Colombian nun of the Congregation of the Franciscan Sisters of Mary Immaculate (see Fides, 3/7/2017). "We know about her, from the testimony of her sisters, that she is accepting this persecution with courage, faithful to the Gospel", writes Fr. Rafael, remembering her among the 340 million persecuted brothers in faith throughout the world.
"Sister Gloria Cecilia was able to offer her life in exchange for another younger sister, overcoming fears and not fleeing threats. She is a witness of the evangelizing mission". Despite the difficult situation in Mali, the sisters have continued to reaffirm their missionary option by clearly announcing their message. The Colombian priest recalls that "Sister Gloria's imprisonment confirms that those of us who follow Jesus discover the ultimate Mystery of reality from his love and his extreme dedication to human beings. In this imprisonment, believers see God himself identified with Sister Gloria Cecilia, but also with all those who suffer. This is the God who cries out against injustice and forgives, even if it may seem incredible, all the executioners of all times. This is the God in whom all Christians believe, trust and hope. Nothing will stop him in this effort to save and care for all those entrusted to him". Faced with the tragedy of the nun of Nariño, kidnapped while she was fulfilling her mission in Karangasso, Mali, the persecution of many brothers and the churches burned and destroyed, Fr. Rafael urges everyone to persevere in prayer for those who are persecuted, always remembering that Jesus gave his life on the cross. The priest invites us to remain attentive to the Lord's call in welcoming our brothers who need help and to recognize that the rejection of the gospel is also manifested today in blind violence against the conscience of the human being. (MP/AP) (Agenzia Fides, 7/9/2021)