EUROPE/ITALY - Missionaries who leave, leave again and return: it is always mission time 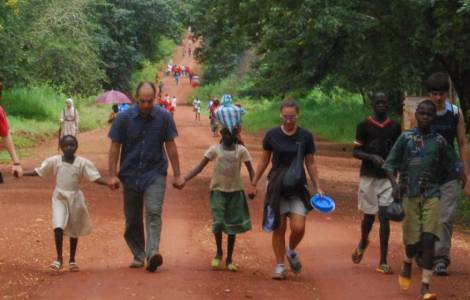 2021-10-12
Scalabrini and his passion for migrants, a key to interpretation for the contemporary world: towards the Scalabrinian Year

2021-09-21
Armenian Catholic bishops summoned to Rome to elect the Patriarch. Cardinal Sandri: may the Spirit of Christ help to overcome the logic of alignment

2021-09-18
Pope Francis to the Church of Rome: Mission is the work of the Holy Spirit, beware of the risks of a "do-it-yourself" Church

Genoa (Agenzia Fides) - "To be on mission is to be willing to think as Christ does" said Pope Francis in the message for World Mission Day published on 6 January 2021. "It is always mission time, but September, the start of a new social year, has an extra boost. For us priests of the Society for African Missions (SMA), this month of September is a bit special: many departures and returns to Africa", writes Father Marco Prada to Fides, in view of the 95th World Mission Day which will be held on October 24, 2021. The missionary tells how, after a complicated 2020 for international travel due to Covid, 2021 is allowing a greater movement. "We have seen some of our confreres again and they have updated us on the situation in the countries where they work. The first to arrive was Father Silvano Galli, from Togo. In a few days he will take the plane again, again for Togo, but no longer for his beloved Kolowaré, but for a service as a formator in an SMA seminar in the capital Lomé. From Liberia, Fr. Lorenzo Snider and Fr. Walter Maccalli who was able to embrace his brother Fr. Pier Luigi, released after two years of imprisonment in Mali, kidnapped by Islamic extremists. Fr. Matteo Revelli, parish priest of a large community of Christians from sub-Saharan Africa in the city of Fès in Morocco. Fr. Filippo Drogo has come from Benin to stay in Italy. He left the SMA seminary in Calavi and will be at the service of our institute for his needs here in Italy. In a few days, Fr. Angelo Besenzoni who in the last two years has dedicated himself to the construction of the Church of his new Parish of the Holy Family is expected to arrive from Angola (see Fides, 22/2/2021)". Fr. Prada in his note indicates the beginning of the Italian SMA mission in Central Africa, where Fr. Davide Camorani, Fr. Michele Farina, and Fr. Carlos Bazzara will go (see Fides, 3/8/2021). "The first two will work in the Parish of Monassao, founded many years ago by French SMA missionaries, and now run by Polish missionaries. Fr. Carlos, on the other hand, will join the team of formators at the SMA Seminary in Bangui". The priests of the Society for African Missions are present in total of 17 African countries. In particular, the Italian SMA missionaries work in 7 of them: Liberia, Ivory Coast, Togo, Benin, Niger, Morocco, Angola. In a few weeks, the Central African Republic will join these countries. Outside the African continent, the Italian SMA has been present for a year in Tahiti, in French Polynesia, where Father Sandro Lanfranconi works and where, according to the latest information, Covid is spreading, with a contagion rate 14 times highest in the last two weeks. "The incidence rate has reached 2,800 cases per 100,000 inhabitants in French Polynesia, the highest in France," declared President Edouard Fritch, announcing the closure of schools, institutes and universities. (MP/AP) (Agenzia Fides, 6/9/2021)