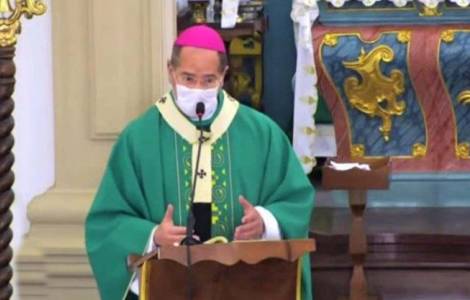 2022-05-18
"Sister Churches": collection of Pentecost for the mission in Mozambique

2022-05-06
Conscious choices for the good of the Amazon and the community: Repam-Brazil campaign ahead of the elections

2022-04-30
Bishops call for urgent change of course: "The situation is very serious"

Brasilia (Agenzia Fides) - The President of the Bishops' Conference of Brazil (CNBB), Archbishop Walmor Oliveira de Azevedo, urged Christians "not to be indifferent" to social exclusion and stressed the importance of public measures for the return to work of the poor. "Hunger is the reality of almost 20 million Brazilians. The father who has no food to give to his son is your brother, our brother. Likewise, the child and the woman wounded by misery are your sisters, our brothers and sisters", said the Archbishop of Belo Horizonte and president of the CNBB, in a video released on the occasion of Brazil's Independence Day, which is celebrated tomorrow, September 7. This day of celebration for Brazilians "should inspire the recognition that all are brothers, including those with whom one does not agree", said the Archbishop in the video sent to Fides. Bishop Oliveira de Azevedo deplored the anger and intolerance, and criticized those who, in the name of ideologies, are dedicated to dividing society with violence: "Whoever defines himself as a Christian or Christian must be a peacemaker and peace is not built with weapons. We are all brothers. This truth is underlined by Pope Francis in the Encyclical Fratelli Tutti". The importance of September 7, the president of the CNBB points out, occurs in the exercise of citizenship, in a political participation that claims "rights, with freedom" and aims to "strengthen the institutions that support democracy". "Do not be persuaded by those who attack the legislative and judicial powers. The existence of the three powers prevents the existence of totalitarianism", he explained. The Archbishop also criticized those who use verbs such as "attack, eliminate, treat as an enemy, ignore or exclude", because "they are verbs that do not fit into a democratic system" and attack democracy. In his message, the president of the CNBB also asked to think about "indigenous peoples, the original peoples", "historically persecuted and decimated", who today "face serious threats that come from the greedy economic power, which extracts and does everything to impoverish natural resources". "The irrational and limitless exploitation of the soil, with the cutting down of forests, is causing a shortage of water in our taps. We cannot let Brazil, internationally recognized for being rich in natural resources, be devastated and become a burned land", he urged. "On Fatherland Day - he concluded -, let us pray that Brazil will find a way to overcome its crises. Let us also pray for the victims of Covid-19". (CE) (Agenzia Fides, 6/9/2021)

AMERICA/DOMINICAN REP. - The Bishops on the occasion of Independence Day: "Let the truth come out for the good of the nation"

ASIA - Asia, the continent of natural disasters and poverty

AMERICA/VENEZUELA - Twelve university students, missionaries among the indigenous people of the Vicariate of Caroni