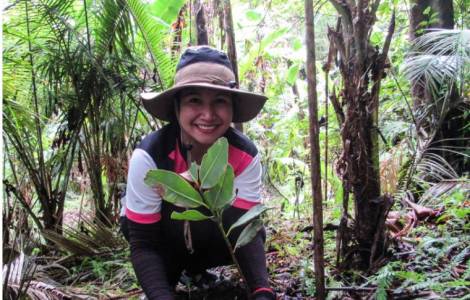 2022-09-28
Support is organized for people affected by typhoon Karding: Refugees under the protection of St. Michael

2022-09-08
Missionaries accused of supporting terrorism: civil society takes the field alongside them

2022-09-07
The Silsilah movement: the culture of dialogue and peace begins with children

2022-08-31
Confirmation of the National Director of the Pontifical Mission Societies, Msgr. Esteban Lo

Manila (Agenzia Fides) - The Catholic Church in the Philippines lives and celebrates the "Time of Creation" with full involvement. The Filipino Bishops exhorted priests, nuns, laity, families, communities and Catholic movements to safeguard creation, a gift of God, respecting every creature, the dignity of human life, the environment. In a pastoral Letter on the occasion of the "Time of Creation", which the universal Church celebrates from September 1st to October 4th, Mgr. Romulo G. Valles, Archbishop of Davao, outgoing president of the Philippine Bishops' Conference (CBCP), said: "Our common home is on the brink of catastrophe. Urgent action is needed. We hope that this Time of Creation will lead us to renew our commitment to act to ensure that all creation has a healthy and safe home in which to thrive and participate in the renewal of the Oikos (house) of God".
"Be responsible stewards of creation", said Cardinal Jose Advincula, Archbishop of Manila, at the opening celebration of the "Time of Creation" on September 1st, calling all the faithful to "protect God's creation not as a monopoly, but as a gift that must be shared with everyone". "What we have received as a gift, we must give as a gift. Here the missionary dimension of our Time of Creation comes into play", said Cardinal Advincula, speaking in the Cathedral of the Immaculate Conception, in Manila. And "God's gifts cannot be used to the detriment or advantage of others. Jesus teaches us that gifts should not be monopolized by just a few. The gifts must be shared and everyone must benefit", he added. "Let us join Pope Francis in his prayer intention so that we all make courageous choices for a simple and ecologically sustainable lifestyle", said the Cardinal. "And with the 'inspiration of St. Francis of Assisi, we undertake this Time of Creation with gratitude for the gifts we have received and with the firm determination to share and be responsible stewards of God's gifts", he added. From September 1st to October 4th, the feast of St. Francis, all Christian communities in the world celebrate the beauty and goodness of creation. This global celebration began in 1989 with the recognition of Creation Day by the Ecumenical Patriarchate, which is September 1st, and is now embraced ecumenically. The Filipino Church has extended the Time of Creation for another week, until October 10th, a Sunday dedicated to the indigenous peoples in the country. The Bishops urge everyone to celebrate the Second Time of Creation "with families, communities and parishes, in line with Pope Francis' 2015 Encyclical Laudato Sì on the care for the common home.
Various activities have been organized throughout the country to launch the "Laudato Sì 'Action Platform", a seven-year program together to experience Laudato Sì. In the Pastoral Letter issued by the Bishops in all the dioceses, the faithful are also invited to sign a petition inviting international institutions to do more for the protection of the planet and therefore of humanity. "Invite your families and friends to sign this petition for the next two major meetings on Biodiversity and Climate Change", said Mgr. Valles. "The United Nations Conference on Biodiversity (COP 15) brings together nations from around the world to tackle the problem of biodiversity loss, but the United Nations Conference on Climate Change (COP26) addresses the urgency of the climate crisis. These two issues, climate and biodiversity, are closely linked: climate change is expected to become an increasingly important factor in the loss of biodiversity", explains the Letter. Quoting the UN Secretary General Antonio Guterres, the Filipino Bishops say: "The world is dangerously close to irreversible global warming unequivocally caused by human activities. This is the context in which we are called to celebrate the Time of Creation, renewing and respecting our common Home which is on the brink of the abyss".
Already in 2003, through the Pastoral Declaration of the Permanent Council, "Celebrating the Day of Creation and the Time of Creation", the CBCP asked all local communities to observe and celebrate the "Time of Creation". In 2015, Pope Francis formally added to the Catholic calendar the "World Day of Prayer for the Care of Creation" as a day of prayer to be celebrated annually at a universal level. In 2016 the Pope officially invited all Catholics in the world to celebrate it within the "Time of Creation", a special month to reflect, raise awareness, act. This year, the theme for the Time of Creation is "A home for all. Renew the Oikos of God". (SD-PA) (Agenzia Fides, 2/9/2021)

AMERICA/ARGENTINA - "Listening and walking together": opening of the Laudato Sì week 2022