AMERICA/MEXICO - A priest killed in the state of Morelos 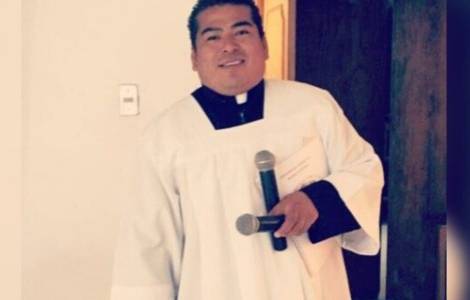 2021-10-13
The Bishops: "let us raise our voices and defend the truth about the dignity of the human being, the sanctity of life and marriage"

2021-10-02
March October 3 in favor of women and human life: for the Bishops it is "an expression of love for women and for life"

2021-09-21
The Bishop of Veracruz on migrants: "the position of the Church is to protect and help them while they are in our land"

Galeana (Agenzia Fides) - On the morning of August 31, the lifeless body of Mexican priest José Guadalupe Popoca was found in the parish of San Nicolás de Bari, in the town of Galeana, municipality of Zacatepec, in the state of Morelos. According to the first information received by Agenzia Fides, the parish priest was shot dead in the head. Father José Guadalupe was born in Jiutepec, Morelos, on December 12, 1977, and was ordained a priest on August 15, 2007. He exercised his priestly ministry in several parishes of the diocese of Cuernavaca, devoting himself in particular to young people.
Mgr. Ramón Castro Castro, Bishop of Cuernavaca, the diocese to which the parish belongs, expressed his dismay and sadness in a video message, asking the authorities to investigate the reasons for this crime, and called for prayers for the priest's eternal and so that God may grant his community the courage and the strength to face this loss.
Monsignor Alfonso G. Miranda Guardiola, Auxiliary Bishop of Monterrey and Secretary General of the Mexican Bishops' Conference (CEM), said in a message: "With deep sorrow, we express our sadness and our dismay at the murder of Father José Guadalupe Popoca, a clergyman from the diocese of Cuernavaca. We express our condolences to Bishop Ramón Castro, his family, his friends and the faithful he served in his life as pastor. We ask for the conversion of those who cause pain and suffering, so that they can return to the path of good. God created no one to do evil, he loves us because we are his children and he expects us to choose the path of life". Finally, the Secretary General of the CEM thanks the priests, "who carry out their work throughout the country" and asks them "not to lose hope, to pursue their ecclesial mission with ardor despite the difficulties, following the example of Jesus, the Good Shepherd".
According to the National Public Security System, between January and July 2021, 769 murders and 10 kidnappings were committed in the state of Morelos. According to the Mexico Peace Index 2021, Morelos is the ninth most violent state out of the 32 Mexican states. (SL) (Agenzia Fides, 1/9/2021)

AFRICA/SOUTH SUDAN - "The two slain Catholic sisters are our martyrs", said the Archbishop of Juba at their funeral