VATICAN - Father Jeyaraj: "The way to peace is through justice and overcoming inequality" 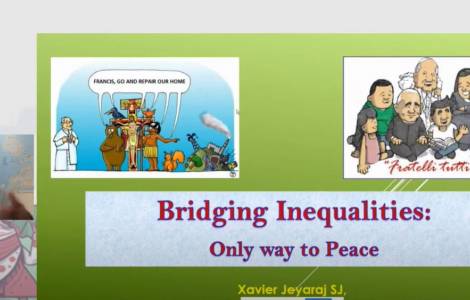 2021-11-26
Pope to Pauline Family: Preach Christ with prayer and all available media

2021-11-19
Sister Gloria after her kidnapping as a religious: "I had to keep silent so that God could protect me"

2021-11-16
Multiculturality and formation: the International Congress of Urbaniana University

Vatican City (Agenzia Fides) - "The importance of fraternity is best understood when hearing the cry of those who live in situations where this fraternity does not exist, that is, the poor, the needy, the victims of wars, persecution and injustice of peoples who have lost security, peace and common coexistence. The way of brotherhood requires us to ask ourselves questions that are anything but trivial, which this cry raises and which our troubled world is already facing", said Father Xavier Jeyaraj (SJ), Director of the Secretariat for Social Justice and Ecology of the Society of Jesus, during a webinar entitled "Access to Rights and Respect for Human Dignity" on July 31 (see Fides, 31/7/2021).
Based on the Encyclicals "Laudato Sì" and "Fratelli Tutti" by Pope Francis, Father Xavier Jeyaraj mentions in his contribution some crucial points for the promotion of public measures, programs and initiatives that contribute to a real education for peace, human dignity, to authentic and inclusive development. "The culture of encounter", according to the Jesuit, "requires that the human person be placed at the center of all political, social and economic action: in order to move forward on the path to social friendship and universal brotherhood, it is essential to become aware how much a human being is worth, how much a person is worth, always and under all circumstances". In societies that ignore or marginalizedcertain groups of people, one muit is necessary to be able to react "with a new dream of brotherhood and to respond to a social friendship that is not limited to words ... not in the sense of an excuse that makes us lose touch with reality, or a utopian consolation in the face of a harsh reality, but in terms of what Pope Francis indicates as a vision that is capable of providing orientation, showing the direction of path, motivating change".
In today's world there are many forms of injustice in a profit-based economic model that does not hesitate to exploit people: "While part of humanity lives in abundance", said Father Jeyaraj, "another part sees its own dignity denied, despised or trampled on in his basic rights. The dignity of the person is therefore the true, non-negotiable value".
To this end, a universal “we” feeling must be created, which is also deeply rooted in the Catholic faith. "With the signing of the Abu Dhabi Document on Human Fraternity", explains the religious, "this becomes true even in the concreteness of the wording of the text: what we have in common we are also able to express in words, in which we can all recognize ourselves". This he concludes, "is the best way to concretely tread a path of peace in building a people in which the differences are harmonized within a common project". (ES) (Agenzia Fides, 28/8/2021) 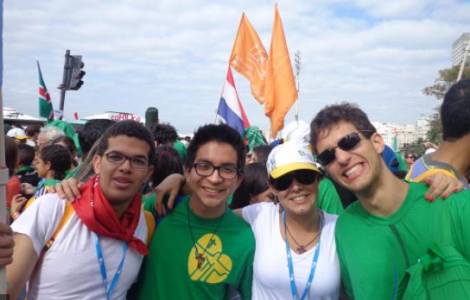 ASIA/KIRGHIZISTAN - Apostolic Administrator: "A small church that tries to bear witness to the gospel by being close"

AMERICA/CHILE - The Bishops: participation in the synodal journey and in the electoral process promotes the common good, equality and peace

ASIA/KAZAKHSTAN - The Bishop of Almaty: "We would be happy to welcome Francis, twenty years after the visit of John Paul II"